If you want to understand how the world works, you have to get out into it.

A large portion of the research undertaken by Stanford scientists doesn't happen in a lab—or, in fact, anywhere near campus. Faculty and students in the School of Earth Sciences spend a good chunk of each year spread out around the globe digging in the dirt, climbing to the tops of mountains, hiking around volcanoes, spelunking in ancient caves, rowing down tropical rivers, diving deep into the oceans, and drilling through polar ice in hopes of better understanding our planet. Here's a look at a few of these researchers at work and a glimpse of why each unique environment they travel to reveals a different picture of our world. 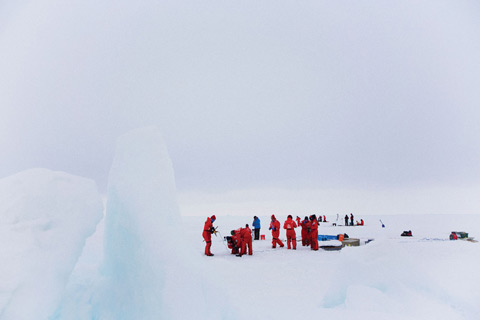 ON THINNING ICE: At a typical sampling station scientists extract dozens of cores and take various measurements of the water underneath. (Photo: Amanda Kowalski)

When you're hiking across the ice fields that surround the planet's poles, you have to watch your footing. As the summer sun melts the frozen ground it's easy to take a wrong step and plunge into the freezing ocean below. "There'll be cracks in the ice that are covered in snow," says biological oceanographer Kevin Arrigo. Once, he recalls, "my foot went all the way through and I got a boot full of water."

When they reach a "station," or sampling site, the scientists don foul-weather gear and steel-toed boots and lug their equipment down a steep gangplank. (An armed spotter stays behind on the ship to keep an eye out for marauding polar bears.) Once on the ice, they use electric drills to carve boreholes and lower instruments into the water to measure temperature, salinity and the concentration of particles. They collect core samples of the ice and samples of the water from various depths, which they haul back to the ship for analysis.

Arrigo is specifically looking at phytoplankton, minuscule marine plants that live in the water. These microscopic organisms feed everything in the ocean and produce more than 50 percent of the oxygen we breathe. "Usually people think of trees, but it's mostly the phytoplankton that are doing the work," he says. In the polar regions, these tiny plants are so abundant in the upper layers of the ocean that they actually control the climate over the course of thousands of years. "They're responsible for the coming and going of the ice ages . . . they suck CO2 out of the atmosphere and the planet starts to cool." 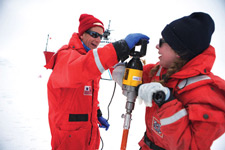 Three years ago, Arrigo observed the Chukchi phytoplankton behaving bizarrely. Normally they don't begin to bloom until midsummer, when the ice cover has melted and they are exposed to the sun. But in 2011, the team discovered an enormous bloom of phytoplankton—the highest concentration ever measured anywhere—under three feet of ice. "The water was pea-soup green," Arrigo recalls. "We were drilling holes to sample the water and we couldn't see the bottom of the hole. It was like that 200 feet down. We couldn't believe it!" Arrigo theorizes that the effect of climate change on the polar ice contributed to the unseasonable bloom. "The Arctic used to be really thick, old, ridged ice . . . this rubbly mess you couldn't get an icebreaker through," he explains. Now, because the ice melts and refreezes each year, it is smooth and flat. "These nice ponds form on the surface, and they act like windows and let light through."

On the plus side, the increased activity of these phytoplankton could help reduce atmospheric carbon dioxide. But just like plants in your garden, microalgae need more than light to grow; they require nutrients such as nitrogen, phosphorus and iron. Arrigo's next trip into the field will take him to Antarctica to study how the phytoplankton there have adapted to an iron-deficient environment. To understand the ways in which our world is changing, he says, it's important to know what makes these tiny organisms tick. 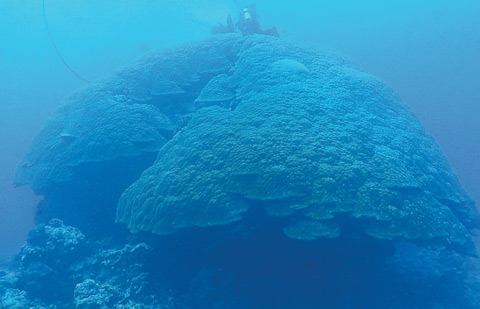 SEA CHANGE: A giant coral, nicknamed "big mama," holds a record of the ocean's health, dating back to the time of the conquistadors. (Photo: Rob Dunbar)

In the middle of the Southwest Pacific Ocean, approximately halfway between Hawaii and New Zealand, some of the world's biggest corals lie beneath a massive, swirling vortex of ocean currents. Measuring up to 30 feet high and 55 feet in diameter, the largest are the size of a modest house. Although they grow relatively quickly by coral standards, it's taken these behemoths half a millennium to reach their current size. That's one of the reasons environmental scientist Rob Dunbar travels to this remote location to study them.

"There's a tramp steamer that goes by once every two or three weeks—a beat-up, derelict old ship that's 60 years old and held together with Band-Aids," he says. But when that's out of commission, he has to charter a boat to make the six-hour trip from Pago Pago to one of American Samoa's smaller islands.

From there, it's a two-hour cruise by catamaran to the site off the coast of Ta'u known to locals as Valley of the Giants. As the day presses on, the trade winds kick up huge waves, so the researchers set out at dawn. Once in position above the coral colony, the boat has to be specially anchored so that the strong currents don't break the hoses connecting the diamond-tipped hydraulic drill to the engine onboard. "That's happened before," Dunbar says, "but we use vegetable oil instead of hydraulic oil so it's not toxic if we have a spill."

The team spends six hours a day diving down to the corals, the mushroom-like tops of which are about 30 feet below the surface. The heat and humidity can be draining. In teams of two, the divers take 90-minute shifts, repeatedly pressing the hollow drill into the calcium carbonate to extract core samples. They choose at least three locations, hoping the spots they've picked will allow them to get down to the oldest parts of the coral.

Only the outermost centimeter is alive. Much like a tree, these giant coral lay down a new layer of growth every year. As new layers are deposited, the pieces below harden, trapping the chemical signature of the surrounding water inside. Once the cores are collected, the team pours cement plugs into the holes they've made to ensure no animals take up residence. They haul the 300 to 400 pounds of samples back to their base on the island of Ofu, dry them in the sun and later ship them in crates to Stanford for analysis.

Back on the Farm, PhD student Neil Tangri is using cores that Dunbar and his team collected last year to better understand how anthropogenic climate change has affected the South Pacific and global weather phenomena such as El Niño that originate there. "We can go back and figure out the temperature of the water, the pH and the salinity . . . down to the month," Tangri says.

The coral he is currently working with is over 500 years old. "One of the advantages of having such a long record," he adds, "is I've got 150 years of records from human influence of climate and 350 years of prehuman influence" for comparison. 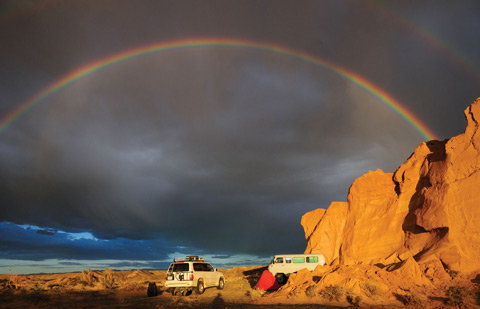 Driving hundreds of miles across the Gobi isn't most people's idea of a summer road trip. The terrain is punishing, and the ever-present dust, which gets into everything, means frequent breakdowns. Then there's the language barrier. Even with an English-speaking geology student from the National University in Ulaanbaatar as a guide, "things were often lost in translation, and we would end up at different locations than we intended," says PhD student Jeremy Caves.

Over the course of one recent trip, Caves, a member of Professor Page Chamberlain's terrestrial paleoclimate lab, traveled 800 miles from far Western Mongolia to Ulaanbaatar, the capital city. "A road trip like that in the U.S. would take one day, but it took us five," he says.

Yet if you want to understand how Central Asia's largest desert, which is bordered by the Altai and Hangay mountains to the north and the Tibetan Plateau to the south, formed millions of years ago, this is the place. Today, high winds that occur during spring storms kick up the Gobi's yellow sand and create enormous dust clouds that can disperse as far as the United States. But scientists know from looking at the makeup of the soil that 65 million years ago the desert was actually a series of lakes.

The prevailing theory about what happened holds that the rise of the Tibetan Plateau 50 million years ago changed the pattern of Asian monsoons, blocked the air coming from the Indian Ocean, and dried out the land. But Caves thinks that the more recent uplift of the Altai and Hangay ranges 30 million years ago could have been responsible.

To test this hypothesis, Caves collects samples of rock and sediment in the field and ships them back to campus for analysis. Every morning, he and his team hike to nearby geologic outcrops—areas where the bedrock pushes up through the soil and becomes exposed to the surface. He is looking primarily for sediments containing calcium carbonate. "We drop a small amount of hydrochloric acid and if carbonate is present it will fizz as it dissolves into CO2." 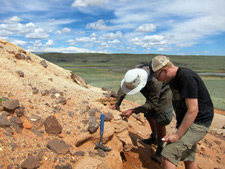 The process of collecting and testing at each outcrop takes about a day. Once they've finished, Caves and his team drive on to the next site and set up camp for the night. They repeat the process each day until they've canvassed the entire area they're interested in.

Back at Stanford, Caves takes the samples he collected in Mongolia and runs them through an isotope-ratio mass spectrometer. This device shoots a beam of charged particles at the samples and measures the charge and type of particles that result from the collision. In this case he's looking for isotopes, a type of atom that is missing a neutron or has an extra one. The types of isotopes present help Caves to date the sediments and understand the environmental conditions in which they were formed.