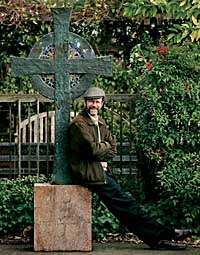 In the musty catacombs beneath England’s Canterbury Cathedral, 30 people listen intently to the last sermon preached by Thomas Becket, who was assassinated by supporters of Henry II on December 29, 1170. Silence falls as the group reflects on where they are and what they’ve just heard.

“It was Becket’s Christmas sermon, in which he had a premonition of his death,” explains historian James J. Rawls. “We were right on the spot, basically, where Becket was murdered and we listened to his last words being read aloud.”

The experience was part of a 2004 tour led by Rawls, ’67, and the Rev. Canon Stephen Brannon. Conducting modern pilgrimages to ancient places, Rawls says, brings together the major threads of his life: a strong academic bent, a hands-on approach to popularizing history, a deep spirituality and a love of travel. “When you travel your senses are heightened. You’re out of your regular environment and you’re seeing and experiencing new things. I like to seek out places that have a history of major religious activity.”

Over the years Rawls has been a history instructor, the author of some two dozen books, the popular “Dr. History” on a San Francisco talk radio station, a consultant for the creation of Disney’s California Adventure and a licensed lay preacher in the Episcopal Church. The son of a military man, he grew up near Washington, D.C. “We’d go to what I called the Egg House, which was the Jefferson Memorial with the dome, or to the Lincoln Memorial or the White House or the Capitol building. These were all in my hometown, so to speak. With that, you can’t help but have a historical consciousness.”

At Stanford in the mid-1960s, Rawls studied English because he loves writing, but he switched majors. “I was getting better grades in history. That seemed to tell me maybe I should go that direction.” He earned his PhD from UC-Berkeley.

It was the Vietnam era, and his initial interest was foreign policy. “I thought I could make a contribution by studying the origins of American policy and its evolution.” When Rawls applied for conscientious objector status, his draft board ordered him to report for a preinduction physical. He had no church affiliation, but his opposition to the war was based on religious and moral grounds. “I think ethics is an important part of religion. So I could easily and without any dissembling present that as a religious argument.” The appeals board agreed and granted him CO status.

As a grad student Rawls got a job teaching part time at San Francisco State, where he scrambled to pull together a course on California history. At first he was dismayed at this unfamiliar topic, but it became his passion. “If anybody knows of me, it’s because I’m a California historian. That’s what I would hang my hat on, primarily.” His dissertation focused on the war against California’s native peoples and developed into a book, Indians of California: The Changing Image (U. of Oklahoma, 1986). He also has published leading elementary and college-level California history texts.

Until his retirement last December, Rawls taught at Diablo Valley College in Pleasant Hill, Calif., for 30 years. In 1990, a former student working at San Francisco’s radio station KNBR sought him out, and for the next five years Rawls was “Dr. History” during the morning drive slot. Twice a week he engaged in three minutes of banter about some aspect of early California.

One thing led to another: his radio spot spawned a book series, starting with Dr. History’s Whiz-Bang: Favorite Stories of California’s Past (Tioga, 1991). Then one of the books made its way into the hands of the man charged with creating Disney’s California Adventure, who hired Rawls as a consultant. Rawls presented seminars to Disney’s imagineers and helped write the storyline for the park’s centerpiece film, Golden Dreams. He later joked to his students that they could slog through his course for a semester or go to the theme park and watch the whole thing in 23 minutes. “It’s all there,” he explains. “It’s the same story, just in a little different format. Condensed.”

Rawls has long believed in popularizing history. At San Francisco State he led three-day travel courses on Jack London, starting at the author’s birthplace in San Francisco and ending at London’s gravestone in Sonoma Valley. Other ventures included stints as a naturalist and historian on cruise ships.

Through the years, Rawls’s religious awareness deepened. At Cal, he had studied English church history in the 16th and 18th centuries. “One of my history professors told me, ‘This is living stuff. We still do this, we still have the Book of Common Prayer.’ So I started attending the Episcopal church in Berkeley,” he says. Rawls and his wife, Linda Higdon, moved to California’s Sonoma Valley in 1986, and there he became licensed as an Episcopal lay preacher. He struck up a friendship with Brannon, and the two hatched the idea for On Pilgrimage tours, which began in 2004.

Rawls’s interests blend perfectly as he leads a hike to the spot where Mary Queen of Scots was captured or escorts a group through an ancient mosque in Spain. “Jim puts together his profound historical knowledge with a deep spirituality and just a great personality, and brings it all together. He loves sharing his knowledge and experience,” says Brannon.

The trips average 12 days, focusing on one region and taking in both must-see spots and what Rawls calls “hidden gems”—places with historical, sacred or literary significance that are unknown to the average traveler. So far Rawls and Brannon have led one pilgrimage a year—to western England, Scotland and Andalusia in Spain during Easter week this year. But they may schedule them more often, since the 30 spots on next year’s trek to northern England are already filling up.

Barbara Cobb, a two-time pilgrim, says that’s because Rawls and Brannon provide an excellent balance of historical and spiritual information, and set the stage for contemplative awareness. “There’s camaraderie with the other modern pilgrims plus a feeling of continuity with people who have done this throughout the ages. It’s very personal,” she says. “It’s a time to reflect, a time to get away from our normal life and a time to get closer with God.”

Pilgrims range in age from mid-20s to mid-80s and include Roman Catholics, Methodists, Baptists, Lutherans, Episcopalians and at least one Buddhist. “I would characterize them as people who are spiritual seekers, who have a spiritual hunger and are interested in this type of travel, whatever their religious background,” Rawls explains.

Outside Oxford, the first pilgrimage visited a relatively obscure church that inspired Lewis Carroll’s Alice In Wonderland. The tiny, unheated building houses a healing well that predates Christianity. One by one the tour members disappeared down the steps to the underground pool. They dipped their hands in the water and then just sat and thought for a moment. When they returned, many had tears in their eyes. “It allowed people to commune, to be open to God’s healing power,” Rawls says. “That’s what it’s all about; just being aware.”

PATRICIA LYNN HENLEY, MA ’95, is a journalist in Sonoma, Calif.

All About Indian Law

Life as an 'Accompanying Spouse'

What singles me out as a love expert.