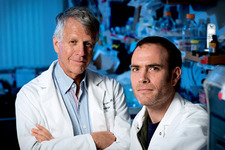 There have been exciting findings before in the Steinman Lab at the Medical School, including one that led to a powerful drug for treating multiple sclerosis. But the latest potential breakthrough has induced unprecedented exhilaration.

"This is the most exciting thing I've done in my career," says Lawrence Steinman, professor in the departments of neurology and neurological sciences, pediatrics and genetics. The thrill comes from work directed in part by postdoctoral research fellow Robert Axtell that indicates there may be two versions of multiple sclerosis: one responsive to commonly used beta-interferon drug treatment and one not.

The "most tangible end product," Steinman explains, could be a test "that would tell you whether or not to take this drug should you be newly diagnosed with MS"—especially valuable since a flu-like side effect of the drug can undermine patients' commitment to the treatment.

Over a longer time frame, Steinman says, the research suggests possibilities for new therapies based on reducing an immune chemical found at high levels in the type of MS that was nonresponsive to beta-interferon treatment. The next pivotal step is validation and advancement of the research published online this spring in Nature Medicine, and important collaborations are under way. Axtell points out that data from patients at Stanford's Multiple Sclerosis Center is furthering research, and there's major interest in the biotech arena.

Biogen, the company behind Tysabri (the MS drug stemming from earlier Steinman research) and a form of beta interferon branded Avonex, was quick to get involved in affirming the results, says Steinman. As soon as the research was accepted for publication, he informed biotech firms that he would provide all the lab's data contingent on a company signing a confidentiality agreement with Stanford (owner of the technology). "Biogen responded first—within one hour, on a Sunday afternoon," Steinman recalls, "and within a week or so, I was meeting with about 10 scientists who wanted to have a very deep and serious collaboration, which is happening."

For the Arts, a Leap Forward