Everything but the Cardinal

President Emeritus Don Kennedy tells why you don’t have to be a nerd to watch birds—and why the Farm is an extraordinary place to do it. 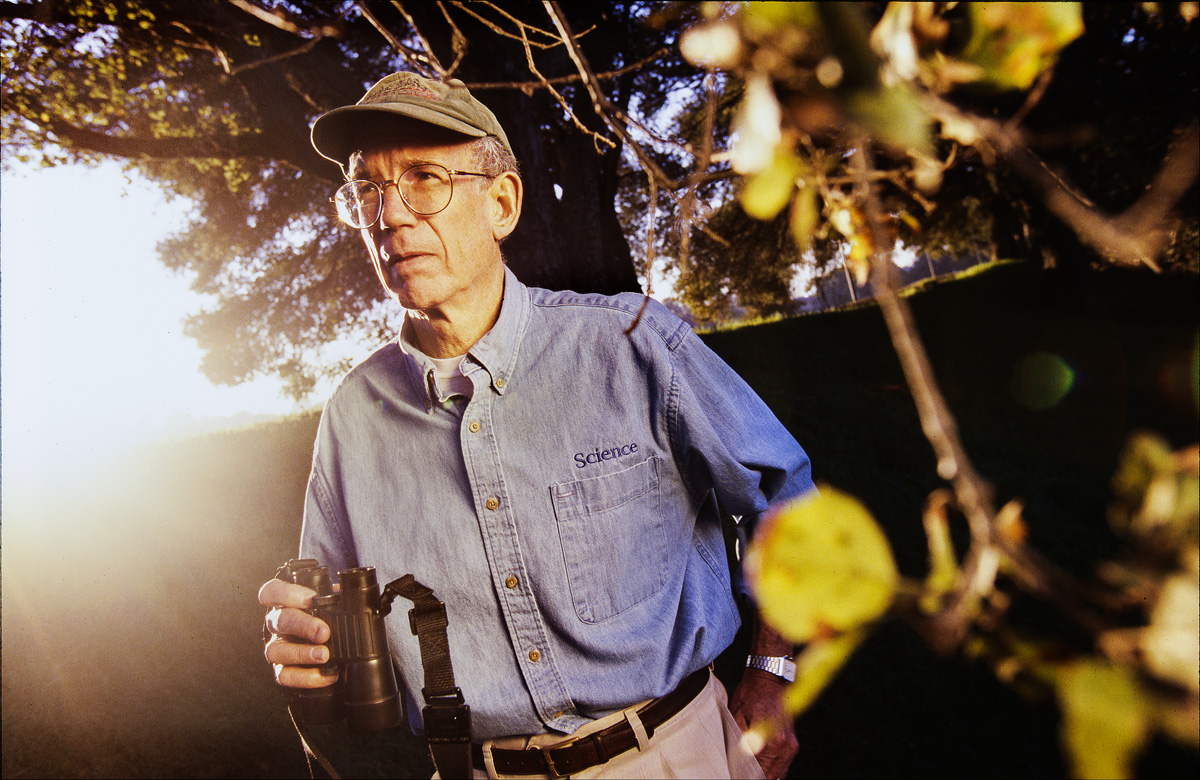 When I walk around campus, I sometimes stop suddenly, whip out my binoculars and train them on a bird. I started watching birds as a kid in semirural Connecticut and have found in my later years that it is a wonderful escape from the tensions of ordinary life. These days, almost no one asks me what in the world I’m doing—in sharp contrast to my youth, when I remember occasionally concealing my binoculars upon encountering a group of age-mates. I knew they would ask me what I was up to—and, having found out, would mark me down as a nerd.

It isn’t just that I now look vaguely professorial and thus likely to display odd behavior. It’s because almost everyone today knows about bird-watching. Americans are experiencing an explosion of interest in birds as a way of getting to know nature. More than 6 million enthusiasts now buy "birding stuff" (binoculars, field guides, even special software to record observations) and go out of their way to visit places that have interesting concentrations of birds. Half a million pay dues to belong to the National Audubon Society. The trend is fortunate, because it supplies a veritable army of capable observers as data-gatherers to support research in conservation biology. Through national programs like Partners in Flight, birders’ observations help scientists preserve habitats and endangered species. Thus, the popularity of the hobby has created a whole new cadre of accomplished amateur scientists and has spurred many others to join in thoughtful activities on behalf of environmental preservation.

Here at Stanford, nature lovers are discovering an unexpected paradise for finding birds. This opportunity owes much to the generous land endowment the Stanfords provided and to the University’s sensitive environmental stewardship over the past century. In his campus plan of 1888, Frederick Law Olmsted carefully reserved natural, untended places like the "ears" that border the Oval. Beyond the core campus are at least half a dozen distinct habitats attracting characteristic sets of birds. These special places include several types of grasslands in the virtually undeveloped Foothills, vernal (seasonal) Lake Lag, the eucalyptus-dominated Arboretum, riparian (creekside) habitats along the San Francisquito, and even a little-known marsh near the Cantor Center for Visual Arts. The diversity of habitats, the history of experimental plantings, and the University’s efforts to preserve relatively undisturbed spaces have woven a patchwork quilt of inviting landscapes. And the birds have responded—voting, as it were, with their wings.

The Farm excites not only campus birders, but also Bay Area experts. Some are really hooked, and more than a few are extraordinarily gifted. In fact, many people who watch birds for fun have attained a level of expertise formerly reserved for ornithologists. There is a local e-mail network of such experts, called South Bay Birders; I joined it a couple of years ago with the encouragement of one of them, law professor Tom Grey, ’63. Their proficiency amazes me. If birding were basketball, the South Bay Birders would be playing above the rim: they analyze seasonal plumage changes in rare seagulls, debate the identification of subspecies and often find rarities—like the summer tanager that strayed into the Cactus Garden in the fall of 1995.

Fine for them. But for most of us, satisfaction comes in finding and identifying birds that are, well, less exotic. So what can a more casual visitor expect to see?

First of all, anyone who thinks the Stanford Cardinal is a bird is bound for disappointment. If Stanford had really needed a bird as a mascot, instead of a tree or a color or whatever, no one would have suggested the cardinal. It’s an eastern bird, never recorded in Santa Clara County. But the campus list of ever-seens does include well over 150 species, to the delight of birders who walk the Dish (see sidebar), roam the Mausoleum area or visit Lagunita when winter rains have converted it to Duck Heaven.

For a good introductory walk, one could do worse than to start at the Main Quad and explore the central campus for a while. The cliff swallows that return here each March—about as reliably as at Capistrano—to nest under the eaves of the Quad are as much a part of that setting as red tile roofs. Raucous acorn woodpeckers, with their colonies of extended families, make the Inner Quad ring with their slightly insane laughter. White-throated swifts cruise for insects in the air above, and the occasional raven or great horned owl perches on the roof of Memorial Church. With luck, you might see a pair of hooded orioles in one of the palm trees that dot the planting circles.

To look for birds migrating through in the spring, try the Mausoleum and adjacent Cactus Garden—quiet spots featuring plants loaded with the berries and insects sought by hungry travelers. Both areas also host winter residents such as hermit thrush, yellow-rumped warbler and Townsend’s warbler. For ducks, head to Lagunita, which, when deeply filled, gets mallards, green-winged teal, bufflehead and an uncommon scaup or goldeneye. And stroll through almost any campus housing area for a glimpse of California quail, thrasher, spotted and California towhees, and the guild of tiny foliage-gleaners that includes bushtits, chickadees and oak titmice.

Any number of campus bird walks are possible. For details on the most rewarding routes, we now have Birds of Stanford, a resource several of us have put together as a service for both visitors and locals. The website provides campus maps, habitat descriptions and bird checklists for each destination. Separate pages for 125 individual species highlight each bird’s favorite foods, distinctive behaviors and other key traits. The birds are illustrated with color drawings like the ones accompanying this article.

Our inspiration for the format was The Birder’s Handbook (Simon & Schuster, 1988), which supplements standard field guides like National Geographic’s or Peterson’s by offering species-by-species notes on the behavior and biology of American birds. The handbook was co-authored by Paul Ehrlich, Bing Professor of Population Studies, who teaches Stanford’s increasingly popular Biology of Birds course (itself an indicator of growing student interest in birds). The publisher gave us permission to use the book’s pages, and Darryl Wheye, Paul’s collaborator on this and two other books, drew the bird portraits and designed and produced the website.

Paul, Darryl and I—along with several other faculty and ace birder Steve Rottenborn—acted as the website’s admissions committee, deciding which species to let in. In the end, we thought it best to be inclusive. So, in addition to the familiar birds of the main campus, we highlighted some that tend to stay in the Foothills (such as white-tailed kite) or along San Francisquito Creek (kingfisher). We applied the same policy to "accidentals" or "rarities"—birds that don’t normally breed here or migrate through, but nevertheless turn up from time to time because they’re lost, sick or simply traveling with a mixed flock. For example, white-throated sparrows are eastern birds, but we find one or two on campus almost every year, mixed in with flocks of closely related (and abundant) white-crowned and golden-crowned sparrows. Discovering a rare bird is a thrill for many birders.

As Birds of Stanford becomes more interactive over time, we are accumulating notes from people who visit the site. We hope to compile and post Stanford-based observations on the occurrence of rarities, unusual behavior of more familiar species and new localities. Thus the website will be organic, growing and changing as new information is added.

Change, of course, is part of life on the Farm, as it is in every environment. Over the decades, development has made the campus less attractive for some species, more for others. Landscaping the Oval and its surroundings, for instance, has cut into the numbers of California quail; disease and selective cutting have made the Eucalyptus Grove less habitable for the great horned owls that used to nest there.

Some developments have improved matters. A visit to Frost Amphitheater shows that even extensive reconfiguration of the terrain can benefit the birds if the replanting respects the region’s ecology.

In other ways, too, the campus fauna has changed over time. Northward shifts in the geographic ranges of some species, probably associated with global warming, have increased the abundance of birds once spotted only south of the Bay Area. The northern mockingbird, for one, was absent from campus as recently as 1931; today it’s perhaps the most persistent avian voice in the faculty housing area. Ravens, too, are growing more prevalent here.

The profusion of interesting birds adds yet another dimension to a campus that is growing as a physical attraction in so many ways. The multiplication of outdoor sculpture and architectural forms has made campus walking a lively cultural experience, while still leaving abundant room for green spaces. These spaces have been planted thoughtfully, with attention to the needs of birds and other wildlife, and the result is a place where anyone can get close to nature.

When I go out on my campus walks, I’m not exactly searching for birds. Unlike some enthusiasts, I don’t expect to add new species to a "life list"—I don’t even keep such a list. Nor do I hope to see rare birds, although the occasional surprise will always be welcome. Instead, I go expecting what I usually get: a sense of peace and comfort that settles over me when I’m in fairly natural surroundings in the company of other living things. The birds are nature’s big bonus.

Donald Kennedy, University president from 1980 to 1992, commutes bicoastally as editor-in-chief of the journal Science in Washington, D.C., and Bing Professor of Environmental Science at Stanford. Atherton-based artist and bird author Darryl Wheye produces gallery art to increase the visibility of campus birds.

His parents reared their family on a patch of dust in a stinking slum and watched seven of their children die. But Alejandro Toledo got out. Now, 30 years after he arrived at Stanford penniless and without prospects, he is trying to make good on an audacious plan he hatched at the Farm--to become president of Peru.

He goes to church every Sunday, refuses to swear and won't even drink coffee. Can Mark Madsen make it in the high-flying, hard-living NBA? Sure. Just ask his mother.

Life in the Reel World