"Everyone is listening to every word you're saying"

Speak delves into the good, the bad and the ugly of public speaking 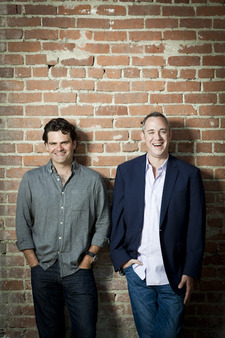 Public speaking. It is the world’s leading fear. But there is another side: In the documentary Speak, filmmakers Paul Galichia, ’96,and Brian Weidling cover the highly competitive world of public speaking—and show us contestants who are silver-tongued even as life threatens to crash down on them.

The competition is the Toastmasters World Championship of Public Speaking, where finalists from Toastmasters International, a speaking and leadership organization with 280,000 members, compete after a year-long process of elimination. The filmmakers dive into the lives of contestants and what brought them to the microphone. It’s not always what you’d think.

We caught up with Galichia for some questions about the documentary. Warning: Spoilers ahead.

What made you think there was movie in Toastmasters?

My producing partner heard a story about a woman who was very shy and who couldn’t look anyone in the eye and who volunteered to give a speech in front of all these executives at American Express, where she worked. A couple of months went by and all these people she worked with were like, “Oh, God, this is going to be a disaster, she can’t even talk to us.”
And the woman went up there and she did a great job and ended up getting a promotion. They asked her, “How did you do that? Because two months ago you couldn’t even talk at a meeting.” She said, “I joined Toastmasters.”

We just started showing up to [Toastmasters International] meetings and filming and then we heard about the World Championships and so we just decided to go for it.

You open with a montage of public speaking moments gone disastrously awry, including Miss Teen South Carolina 2007, Caitlin Upton, going into a tailspin in the middle of the Miss Teen USA contest. Why start a movie about speaking champions with speaking disasters?

Upton just froze in front of millions of people and it turned into this sensation. In a way, it’s ironic because I feel she articulated that feeling of being frozen in front of people in a public speaking moment as well as anyone: Everyone is looking at you; everyone is listening to every word you’re saying; and you’re the only one talking. . . . There’s nowhere to hide.

As the movie develops, you follow some of the finalists at the World Championships. How did you choose whom to focus on?

Everyone had a compelling life story, but I don’t think that anybody approached LaShunda [Rundles] as far as her inspirational message and her tale of triumph over adversity. Here’s a woman who is basically on her deathbed several times and yet she overcomes this really terrible disease (Lupus) and becomes the world champion of something.

Did you find yourself consciously or unconsciously rooting for the people with the best story to win?

I think you do a little bit, to be completely honest. You try to be as objective as possible. You don’t want people to lose, but I think with LaShunda, she was just an inspiring figure from the moment we met her and she had such a cool story and a great way of living her life. Unfortunately, LaShunda passed away recently. That’s been a sad thing, but her message lives on.

The film’s most powerful moments come after she wins it all; she then falls gravely ill. As a filmmaker, what is it like to know that such suffering is probably going to increase your movie’s impact?

It does give the film a deep emotional punch. Here’s a woman who’s saying, “we’re not half as afraid of dying as we are that no one will ever remember we were here,” and she’s saying that as she’s dying, basically.

We wanted her to be better. It would be worth it for the film to be diminished [if we could change things so she would not be ill]. But part of being a documentarian, you shoot what’s in front on you and you have to follow that.

She’s one of several contestants facing significant hurdles. Another, Rich Hopkins, is an amputee door-to-door salesman with six kids. He is so behind on bills he’s facing eviction. He’s betting everything on winning. I had no idea the stakes would be so high.

Rich, to me, is the classic American dreamer. There is a Willy Loman-type quality to Rich, someone who dreams big, who chases it, but who in the film literally falls flat on this face.

And he’s still resilient. He’s still out there trying to fight the good fight.

What kind of pubic speaker are you?

I have gotten a lot better. I think one of the things about filming this movie and then cutting it together, you almost learn by osmosis. I think I’ve improved a lot.
This interview has been edited and condensed.

Time to Cash Out?

Bills and coins have gotten cumbersome. Their critics say digital money will make everything from buying a latte to climbing out of poverty easier.

Remnants of a Spiritualist's Belief

Why the University got the leftovers from Leland Stanford's brother's s ances.