Stanford’s English department gets its Zoom groove on. 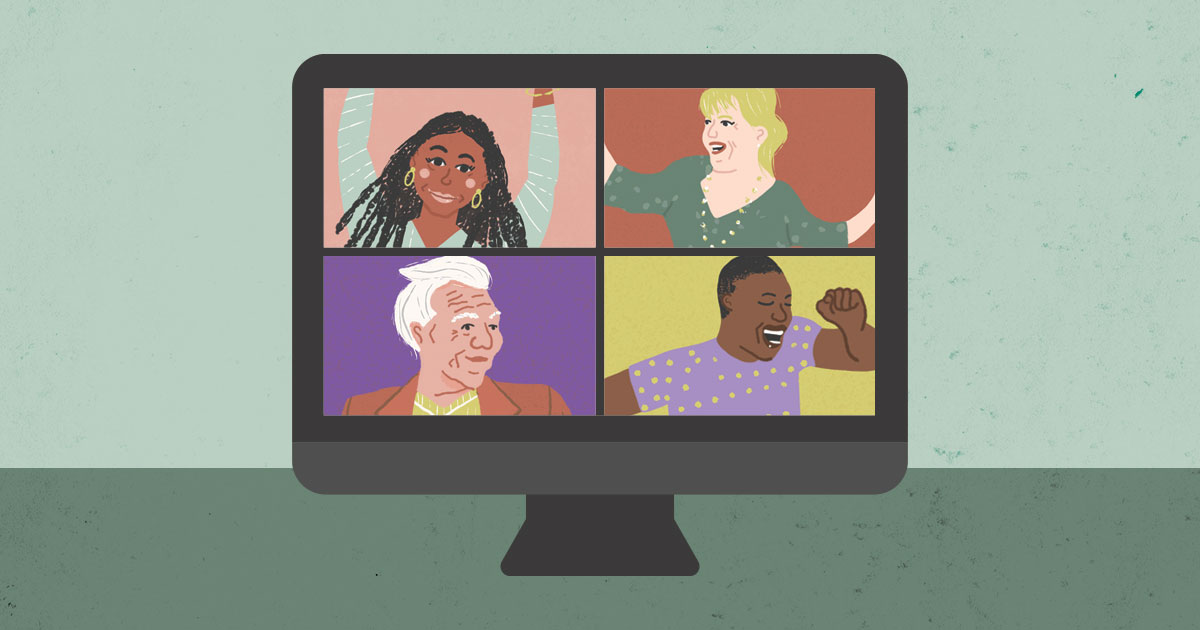 They don’t remember what they cooked. That was beside the point. But Ato Quayson and Grace Toleque do remember dancing to the Caribbean band Kassav’ for two hours that Saturday night in March, first while chopping onions, then while dinner got cold.

Dance is the preferred form of exercise for Toleque, a jewelry designer and the program officer for Stanford’s Institute for Diversity in the Arts. And she and husband Quayson, an English professor, love throwing parties. “So we’re chatting and saying what a shame it is that in this era of social distancing and lockdown, we can’t dance with our friends,” says Quayson.

Which sparked a thought for Quayson: What if he invited his colleagues in the English department—which he had joined all of eight months prior—to a series of Zoom dance parties? Toleque wasn’t so sure. “They’ll be too shy. I’ll be too shy.” Too late, her husband told her. He’d already sent the email.

“I thought it was a brilliant idea, and I was excited about doing it immediately,” says English professor Shelley Fisher Fishkin, one of eight to 10 regulars at the thrice-weekly 8 a.m. gatherings. “I always find that I work better after I dance that day.”

Participants take turns hosting the dance parties by supplying the playlists, which are often full of symbolism befitting a group of humanities scholars. One of Fishkin’s playlists, for example, celebrated the 60th birthday of Motown; another paid tribute to musical artists who had died of COVID-19.

“Within two minutes, you are just moving your body as you need to.”

Other than that, there are no rules. No choreography. Just music, movement and delight, the latter enhanced by the occasional Zoombombing 4-year-old who wants to get the wiggles out. “That shyness really disappears,” says Toleque. “Within two minutes, you are just moving your body as you need to.”

Dance “is something that has been missing from my life, especially in quarantine,” Fishkin says. “No matter how many Zoom meetings you have, you don’t get to experience that kind of energy and pleasure.” When she enthused about the dance parties on Facebook, a classmate made a request: Would she lead one for the First Yale Women? She would, and she did, and it gathered momentum: Now, two dozen of the women who made Yale College coed in 1969 gather biweekly over Zoom to dance and reminisce. “It’s folks from New York, California, Colorado, Barbados,” Fishkin says. “And it’s a joy.”

When Quayson kicked off the first dance party for the Stanford English department, he quoted a proverb from Nigerian novelist Chinua Achebe: “When we gather together in the moonlit village ground it is not because of the moon. Every man can see it in his own compound. We come together because it is good for kinsmen to do so.” And for those who might be reticent to cut a rug with their colleagues—over Zoom, no less—Quayson offers another proverb from his native Ghana: “Where I come from, when people are shy of dancing, we tell them that bad dancing never destroyed the earth. You know, many things can destroy the earth, but not bad dancing.”