Ever Heard of Laptop Rap? 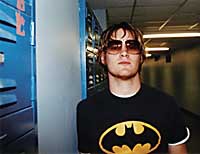 With his cheerful, unassuming demeanor and tufts of blond hair peeking from beneath his trademark Oakland A’s hat, Andrew Nielsen seems an unlikely candidate for hip-hop innovator. Yet, as his growing following can attest, the senior English major has helped introduce a fresh genre to the music mix: post-punk laptop rap.

Nielsen, whose stage name is MC Lars, creates songs entirely on his laptop computer, fusing a punk beat with a literate, almost nerdy sensibility. Subjects range from Shakespeare and Edgar Allen Poe to SAT scores, aliens and performing at the Coffee House. Consider these lyrics from his tune “UK Vice Versa.” “The Florida incident? Democracy at work/But we’ve still got love for your boy Edmund Burke/ If it weren’t for us, you’d be speaking German/But then we gave you Hanson and Pee Wee Herman.”

“It started out just as fun,” Nielsen says of his first attempts to write and produce songs. Then he began performing on KZSU and at the CoHo, and a campus following ensued. While studying at Oxford last year, he attracted the attention of Truck Records, a local label that distributed his first album, “Radio Pet Fencing.” His stateside debut, “The Laptop EP,” was released in January 2004 and spawned a music video for the song “iGeneration”—a riff on The Who’s “My Generation.” Last summer, Nielsen snagged a mention in Rolling Stone, and major labels have come sniffing around. He is working on a third album.

“The plan is to pursue this as long as I can,” Nielsen says. “I expect to attend graduate school and get a PhD in English literature. I could do some cool stuff teaching—the meter of hip-hop in conjunction with poetry.”

This famous wedge of Farm land is 75 years old. And still a big hit.

Baghdad: The War I Couldn't Cover

A journalist's dilemma on the Highway of Death.