Q: How much, if any, energy savings could be realized from eating locally (or at least partly locally)?

"You are what you eat." So goes the age-old adage, prompting concerned eaters to visit farmers markets in droves each year. The allure of local, traceable food has contributed to the rapid growth of farmers markets across the United States over the past two decades, with the USDA reporting a 13 percent increase in the number of operating farmers markets between 2008 (4,685 markets) and 2009 (5,274 markets). But even with farmers markets on the rise, locally fresh fruits and vegetables are generally harder to come by across parts of the Midwest and Mountain West. 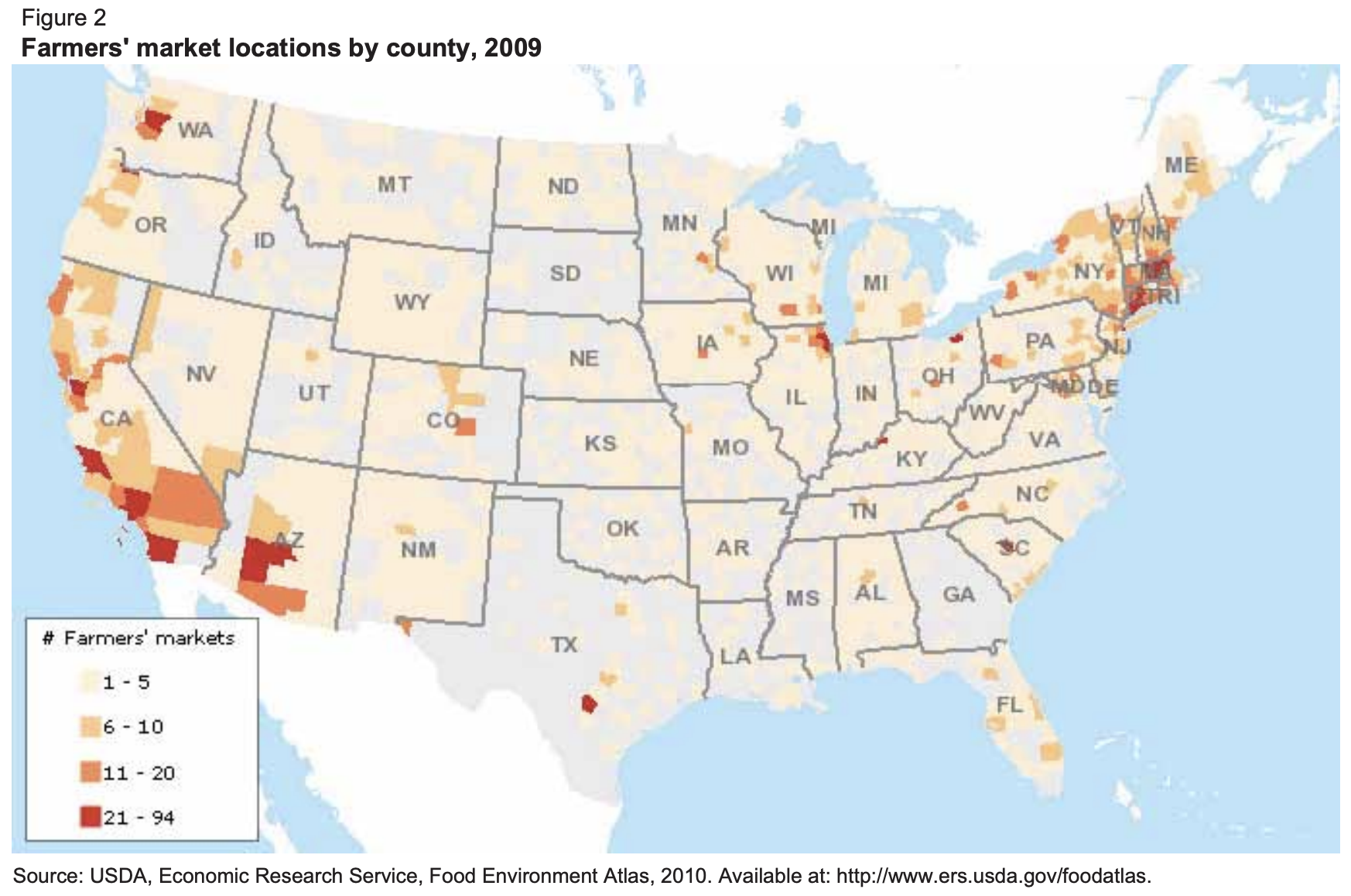 The rapid growth of farmers markets has accompanied measurable increases in direct sales between producers and consumers, according to a May 2010 report from the USDA titled "Local Food Systems: Concepts, Impacts, and Issues." "Direct-to-consumer" marketing produced $1.2 billion in 2007, compared to the $551 million in sales generated in 1997. But despite this absolute increase in direct sales, the numbers look different in the context of a national food system that emphasizes international trade, low prices and high convenience: directs sales generated only 0.4 percent of agricultural earnings in 2007. While I revel in the local Bay Area bounty, for example, the state of California imported 3 million tons of food in 2005, producing more than 70,000 tons of CO2—the equivalent annual emissions for more than 14,000 passenger cars or nearly 6,000 homes. On a national scale, the percentage of imported food steadily increased from 2002 to 2007 (see below), with 13 percent of the U.S. food supply consisting of imports and the average American consuming 260 pounds of imports in 2007. 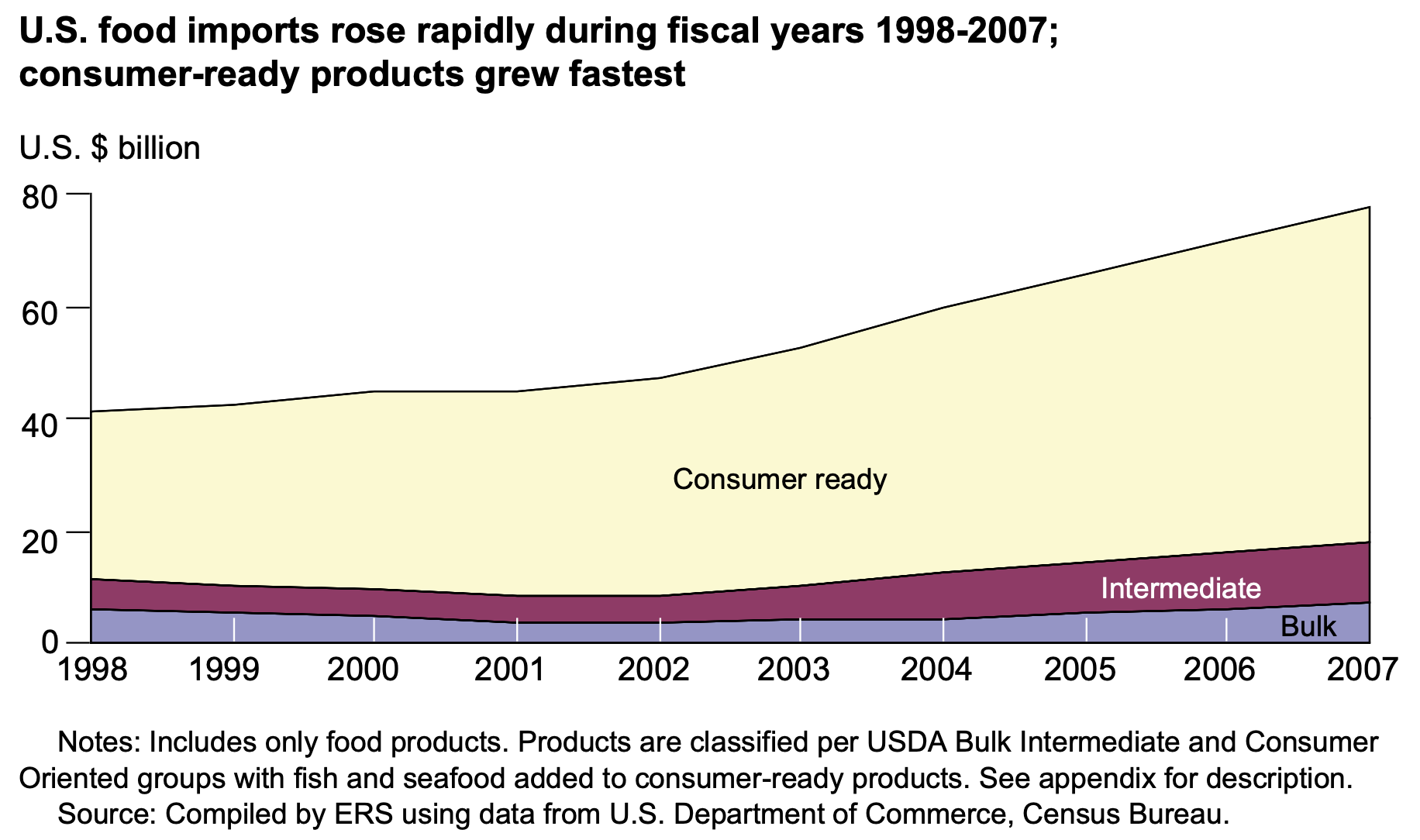 The quantity of imported food in the United States steadily increased between 2002 and 2007, most specifically "consumer ready" products like fruits and vegetables.

Before chewing over the specifics, let's first clarify exactly what we mean by "local" so that we can navigate the differences—environmental, economic and social—between local and far-flung food. By supporting the "short food supply chain," or minimizing the distance and number of steps between the producer and consumer, we will learn what the USDA considers the full "story behind food":

Where: Food miles from farm to fork

Who: Relationship between growers and the community, economic and otherwise

How: Production methods (carbon- and eco-consciousness)

"Provenance": The extent to which the food reflects its place of origin.

I would add the following specifications for identifying the truly local: ongoing dialogue between farmers and consumers based on transparency and accountability and respect for the local soil by taking cues from natural cycles—the seasons, the sun, and the rhythms of farm animals. For a vivid picture of the ideal local system, check out Michael Pollan's discussion of Polyface Farm in the "The Market: ‘Greetings from the Non-Barcode People'" from The Omnivore's Dilemma. Full-fledged localness may not be practicable for everyone, given the constraints of location, budget and time, but even minor adjustments could help fortify your local food system and reduce your foodprint.

Is eating locally the Earth-saving answer?

In order to quantify the energy savings—or not—of eating locally, independent of its political or social benefits, we need to consider the proposition that there's more to our foodprint than food miles. Researchers at Lincoln University in New Zealand include the energy profile of production methods in the foodprint calculus, arguing that locally grown/raised food doesn't realize measurable energy savings if production costs outweigh the greenhouse gas (GHG) emissions from long-distance transport. According to the report, apples grown in New Zealand and exported to the United Kingdom reduce energy consumption by up to 60 percent, even accounting for the emissions generated over 17,840 kilometers of transport. The comparative energy-efficiency of New Zealand apples reflects, most specifically, lower direct input values—the use of fuel, electricity and oil to power farm machinery for mowing, harvesting and moving produce. Transport by sea freight, which is approximately 200 times more energy-efficient than transport via airplane (see chart in the Essential Answer), can further justify the shipment of food around the globe.

Singer and Mason substantiate this production/food miles calculus in The Ethics of What We Eat. When Tom Sherwood of Sherwood Farm in Easton, Conn., installed an energy-intensive, greenhouse system for raising tomatoes out of season to satisfy customer demand, he increased his carbon footprint with the additional yearly input of 400 gallons (9.5 barrels) of heating oil. And when his loyal customers flock to the farm to secure their juicy tomatoes, the GHG emissions from their individual cars—collectively greater than the emissions from a single truck that could deliver the tomatoes to a central location—make eating locally a little less appetizing. (You can read more about greenhouse-grown tomatoes in a recent New York Times article, "Giant Greenhouses Mean Flavorful Tomatoes All Year.")

Love for the land

No system is perfectly carbon-conscious or eco-friendly, but French natives Benoît and David de Korsak practice a more sustainable model at their Sonoma County, Calif., farm and creamery, where they produce St. Benoît artisan yogurt—"great taste . . . no waste!" The de Korsak's green production model honors the French tradition of the "terroir"—food linked closely to the land from which it originates—and a growing philosophy that honors the beauty and bounty of the local land. The St. Benoît model is energy-efficient and eco-conscious from start to finish: milk from Jersey cows raised on pasture in tune with the seasons; packaging in ceramic containers that can be re-deposited and reused with recyclable foil lids; the recycling of unsold yogurt into feed for the herd; and transport vehicles that run on compressed natural gas, which can reduce CO2 emissions by up to 25 percent. The results are astounding: St. Benoît reports that, in the past six production years, the reuse of ceramic containers has prevented the addition of more than 1 million plastic yogurt cups to landfills. And the yogurt is delicious. (To learn more about the local origins of St. Benoît yogurt, check out this article on the product from California Country Magazine.)

Acting with our forks and knives

Given the logistical (and for some, geographical) difficulties of switching cold turkey to eating locally, here's some additional food for thought:

Being conscious carnivores. Let's consider the proposition that what we eat may be as important as where our food comes from. Carnegie Mellon University researchers Christopher L. Weber and H. Scott Matthews question the centrality of food miles to our "foodprint," instead propounding a dietary shift "from red meat and dairy products to chicken, fish, eggs, or . . . vegetable[s] [to] achieve more GHG reduction than [by] buying all locally sourced foods." (Check out the recent Stanford Report release or the previous SAGE post on the impacts of meat production and consumption.)

Community conscience. In addition to the social benefits of eating locally, engagement at the super-local, community level can offer financial advantages. Participation in a CSA—buying monthly shares of food from a local farmer or pitching in to maintain a small community farm—could help the local farmer to retain 80 percent of the profits from sales and could save you, the concerned eater, a third of what you would spend at the supermarket. (If the supermarket is still your best bet, consider using this SAGE post as a guide for navigating the aisles of food frenzy.) Breaking ground on your own or with a few neighbors to establish a community garden could deliver between $500 to $1,200 of produce to each family over the course of the year, and will surely sow the seeds for stronger agricultural infrastructure on the local scale.

And when you can't get enough of your homegrown tomatoes, potatoes, apples or oranges, and decide to go back for seconds, thirds, and fourths, lucky you—they'll be right out your back door.

1. To find grass-fed/pastured meat and dairy products in your area, visit EatWild.com.

2. To get a taste of the super-local life, look for Animal, Vegetable, Miracle: A Year of Food Life (Harper Perennial, 2008) at your local bookstore. Author Barbara Kingsolver may inspire you to new levels of localness with the story of her family's yearlong commitment to food grown/raised entirely in the backyard—fruits, vegetables, herbs, the works.

Annie Kramer plans to receive her bachelor's degree in 2012.