Drama on the Green

The Mariah Stackhouse phenomenon hit a new peak on May 27 when the Stanford junior pushed the women's golf team to its first NCAA championship, sinking birdie putts on the final two holes against her Baylor opponent in climactic head-to-head play, and then winning the title on the first hole of a sudden-death playoff.

Stackhouse, who has emerged as a media sensation with international as well as collegiate performances, was thrust into a rare TV spotlight as the Golf Channel's coverage included almost every hole of all the final round's action. That drama was heightened by the tournament's new use of the match-play format in which five players from each team square off in a hole-by-hole competition instead of totaling overall strokes.

In a GolfDigest.com column that headlined the Stanford victory as "the best thing that could happen to women's college golf," Ryan Herrington praised Stackhouse and her teammates as "deserving winners of the most exciting six-day endurance test" the sport has experienced.

Attention also was showered on sophomore Casey Danielson, who recorded 17th- and 18th-hole birdies to win her match, crucial to the 2-2 tie with Baylor that set the stage for Stackhouse's decisive duel with the Bears' Haley Davis.

In other news, Stanford's Anne Walker was named Division I coach of the year by the Women's Golf Coaches Association. 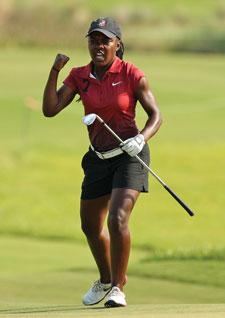 Proud of @StanfordWGolf & their win for the national title. Congrats to @BaylorWGolf on a great run. What a finish! es.pn/1HPGyeK Tweet by Condoleezza Rice

"Casey (Danielson) I knew was a key match for us right out of the gate. I thought if we can get Casey's match then we had a real shot at it." Stanford coach Anne Walker at the post-victory press conference

"I've never been more excited about a couple of finishing holes. I was like, we've worked hard for this all year. It's do or die. There are two holes left. You've got to get through to even have an opportunity to win the championship. That's the kind of stuff you dream for as a golfer." Stackhouse at the post-victory press conference

Within two years of its founding, Stanford Space Initiative became the largest project-based student group on campus. Now its members are trying to put a rocket into space.

The powerful pull of experiential learning.