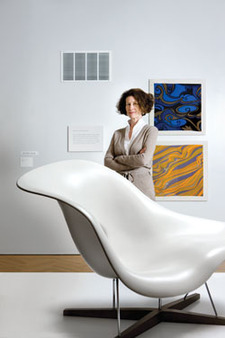 Cara McCarty strolls through the Cooper-Hewitt National Design Museum, a branch of the Smithsonian Institution, conducting an informal tour for two Miami patrons. They’ve come by to view rococo jewelry, silver and furniture on exhibit at the 64-room Carnegie Mansion in Manhattan. By contrast to the sumptuous surroundings, McCarty, ’78, is austere in a black suit unadorned except for the high pleated collar of her silk blouse.

She lets collectors Craig Robins and Ambra Medda drift through the rooms at their own pace while chatting easily with them about upcoming events. Midway through, an older man in a cashmere overcoat interrupts and reintroduces himself, even though McCarty already has recognized master gold- and silversmith Ubaldo Vitali; he’s been on her list of people to contact.

Minutes later, when she rejoins her guests, Robins is admiring a sculpture and mentions that he was offered a similar one through a dealer. Casually, McCarty asks about its ownership. Just as casually, he evades answering. There are only five known versions, and McCarty probes to see if there is a sixth. Keeping track of desirable pieces is as much a part of her job as courting important artists and cultivating donors.

“This is one of the reasons I’m happy to be back in New York,” she says later, referring to the tour with Robins and Medda and to the fortuitous meeting with Vitali. “So many people come to New York, this is really one of the intersections of the design world.”

It’s been a year since McCarty was named Cooper-Hewitt’s curatorial director, arriving at one of the design world’s best addresses after 14 years as curator of decorative arts and design at the St. Louis Art Museum and, before that, 12 years at New York’s Museum of Modern Art. She came with a mandate to build the Cooper-Hewitt’s 20th- and 21st-century collection and a determination to help the public realize that good design means more than just a pretty place setting. “An art museum has to go for aesthetics,” she says. “A design museum gives a lot of weight to innovation—in technology, material, forms.”

Consider something as simple as her silk blouse, a confection of pleats by a Japanese designer. Because of advances in heat-setting technology, those pleats are permanent—and make the blouse perfect for travel because it’s easily washable, dries overnight and doesn’t need ironing. The Japanese have a knack for recognizing a problem—in this case, wrinkles—and working with it, rather than against it. “They take a problem and they solve it, they don’t resist it.”

Beauty, of course, must not be ignored in all this problem solving. McCarty curated the 1987 MOMA exhibit Designs for Independent Living, which featured products for the disabled and the elderly. At least half the show’s objects were Scandinavian ones that married utility and beauty, McCarty notes. “The [corresponding] American products were makeshift—wheelchairs here have been clumsy, heavy, and most were not collapsible. They drew attention to themselves. They really gave the person using them a stigma. Why can’t a wheelchair be beautiful and zippy?

“That was an exhibit to show not just the public but the manufacturers that products could be not just beautiful but functional. If they weren’t functional, they were useless. To me, great design is about meeting people’s needs.

“I’m not really so interested in fashion or trends. I’m more interested in looking for designs that provide solutions. The museum gives a platform. There is always some message behind a show.”

McCarty thought she’d attend Stanford as a biology major and become the next Jane Goodall. A trip to Finland after high school changed her perception of the world; she realized “design was not just a cup and saucer, a product, but a way of life.” She may have been primed with a design sensibility, though; her father is Stanford professor emeritus in civil and environmental engineering Perry L. McCarty, internationally known for his work in the design and operation of water and wastewater systems.

McCarty’s experience at MOMA and in St. Louis provided ideal training for her current job. At MOMA, Arthur Drexler, the curator who shaped the museum’s department of architecture and design, took her under his wing. In the years before he died in 1987, Drexler essentially conducted a one-on-one graduate education in design, grooming his protégée as she moved up the curatorial ladder. It shocked colleagues when she left New York—MOMA is the mecca of museum curators—for St. Louis. But the Missouri job represented a rare “tabula rasa to build a design collection.”

As Cooper-Hewitt’s curatorial director, McCarty is charged with providing direction for the museum’s 250,000-object collection. “It’s crucial to have strength in the American collection, and currently we are very, very weak in that area,” she says. She looks for breakthrough pieces—the turning point or “first” of an object. She considers what it’s made of and how it reflects technology of its time. “A sense of history is really important—knowing where we came from. Fewer and fewer designers and artists have that sense of history.”

Design is at a seminal moment, she believes. Computers, electronics and miniaturization are as revolutionary as plastic was in the last century. Frank Gehry’s fluid architectural lines wouldn’t be possible without computers to work out the curves and angles. There would be no iPods without circuit boards.

IDEO partner Tom Eich—head of the design firm’s New York City office—led a team that created an exhibit, drawn from the museum’s permanent collection, that focused on how designers think and solve problems. He says McCarty, whom he’s met on several occasions, “strikes me as a person who brings a very modern perspective to the problems of design and design thinking,” and he praises her plans to do more shows that illuminate the processes of design, as well as the products.

She has a nose for the hunt: her department at the St. Louis Art Museum made 400 acquisitions during her tenure. In 2000, she spotted an auction listing for a model of a long-lost screen made by Harry Bertoia for Lambert-St. Louis Airport, but there wasn’t enough time to drum up money to buy the piece. McCarty next saw it at a dealer’s booth in a New York show. “My heart was palpitating. I made a beeline for the booth.” The model, “quite a prominent piece,” now belongs to the St. Louis Art Museum.

McCarty’s third-floor office is furnished with a table and chairs, a built-in desk, a computer screen and an abundance of natural light. There’s nary a decorative object in sight, although that could be because her schedule has been hectic since she arrived last July. She reaches in her purse to find a phone number and pulls out a zippered mesh envelope that serves as her wallet. “I can see everything in it,” she says, gesturing to stamps, cash and the paper with the needed number. She seems to take pleasure in the simplicity of the wallet. “Good design does have an aesthetic aspect to it. We like our objects to give us joy.”

What everyday object gives her joy?

“I have a glass teapot based on a design from the Bauhaus movement. I love the way the tea changes color as it steeps. I can tell how strong the tea is by the color. Just the way the light passes through—it’s so classic, it doesn’t need to be part of a matching set.”

Any commonly used objects she hates?

McCarty thinks a moment, then smiles. “Well, every year when I go for my mammogram . . . ”

Game with a Purpose