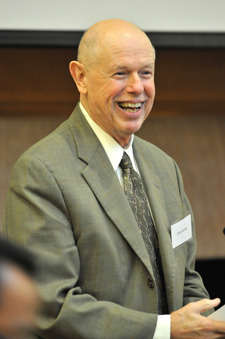 John Lewis was a preeminent expert on Asian politics who led congressional trips to the region and wrote seminal books on China’s nuclear program. But even more than as a scholar, Lewis will be remembered for envisioning a world where peace could be achieved through human connection—something as simple as a game of ping-pong.

John W. Lewis, the William Haas Professor of Chinese Politics, Emeritus, and a senior fellow at the Center for International Security and Cooperation and at the Freeman Spogli Institute for International Studies, died September 4 at his campus home. He was 86.

Lewis was born in Washington state in 1930. His family had deep ties to China, where missionary ancestors had helped found schools. Lewis earned an associate’s degree from Deep Springs College, followed by bachelor’s, master’s and doctoral degrees from UCLA. In the midst of his studies, from 1954 to 1957, he served as a gunnery officer in the U.S. Navy, which, although it did not involve service on the Korean peninsula, piqued his interest in that region of Asia, too.

Lewis arrived at Stanford in 1968, after seven years of teaching at Cornell University. By the early 1970s, he had begun making regular trips to China to strengthen connections between the countries. One key breakthrough came in the early 1970s, when the National Committee on United States-China Relations, of which Lewis was vice chair, sponsored table tennis matches between Chinese and American teams. Those games are credited with leading to President Richard Nixon’s 1972 visit to China. “This is something my dad really stood for,” says Lewis’s daughter Amy Tich, ’85. “These are people. We can build relationships one-on-one with these people. And that can trickle down to being a relationship between these countries.”

By 1986, Lewis was also traveling to North Korea. His trips included a pivotal tour of a nuclear site in 2002. There, too, Lewis is best remembered for his compassion. For example, when he learned that North Korea had a high prevalence of drug-resistant tuberculosis, he set out to understand why and tapped his colleagues in the School of Medicine to help solve the problem. “He wanted to—and will be—remembered for his impact as a teacher and catalyst for action,” says Thomas Fingar, a Shorenstein APARC Fellow in the Freeman Spogli Institute for International Studies, via email. “John believed passionately that a—if not the—primary purpose of scholarly research was to develop understanding that could contribute to the solving of problems and betterment of humankind.”

At Stanford, Lewis’s legacy is particularly felt at the centers he worked to establish, including the Center for International Security and Cooperation, founded with the late theoretical physicist Sidney Drell.

For Tich, though, her lasting memory will be how her father—this eminent political scientist—skipped down walkways in every major capital in the world. “That speaks to who he was,” she says. “He had a terrific sense of life.”

Lewis is survived by his wife of 63 years, Jacquelyn; his children, Stephen, ’80, MS ’80, MBA ’84, Tich and Cynthia Westby; five grandchildren, including Brian Tich, ’15; and a sister, Dorothy Walters.

Moving In with Mom

What a partnership with two caregivers taught me about family.

A Piece of Opera's Genius at Stanford

Rare 'Aida' score may have notes by Verdi's own hand.