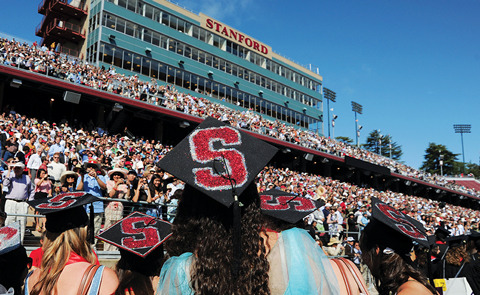 Sunny skies and temperatures a merciful 10 degrees below normal made June 12 a perfect day for Stanford's 120th Commencement—and arguably made some members of the men's swim team grateful for their gowns.

President Felipe Calderón of Mexico gave the main Commencement address, urging graduates to fight for their ideals "with all your heart—no matter how high they seem." Later, he shared informal moments with some of his delighted compatriots, who were among the 1,720 bachelor's, 2,167 master's and 1,054 doctoral degree recipients this year.

The weekend brought inspirational advice in abundance. At Saturday's Baccalaureate ceremony, the Rev. Gail E. Bowman, chaplain of Dillard University in New Orleans, exhorted students to embrace the unexpected, as Hurricane Katrina had forced her to do. Class Day lecturer Rob Reich, associate professor of political science, applauded the diverse ways in which philanthropy has bloomed in every sector—in corporations and public institutions as well as nonprofits—but warned graduates entering the working world about the tension between the profit motive and principles.

As always with the Wacky Walk, students infused proceedings with their own inspiration, from whimsical headgear to costumes saluting such pop icons as the Angry Birds mobile game to evergreen sentiments and many thanks to moms and dads.