Before I explain all of the reasons the 2016 Rose Bowl game was memorable and fun, a disclosure: I grew up in a small town in Iowa rooting for the Iowa Hawkeyes.

My Stanford association notwithstanding, this history presented a certain dilemma, especially since I had spent several days visiting family in my hometown over the holidays, cloaked in the warmth of native enthusiasm for their beloved team. Feelings for the state’s flagship university run very deep; in a state with no major league sports teams, the Hawks are a big deal.

And when it comes to the Rose Bowl, Iowans are like pilgrims on a sacred journey. Traveling to Pasadena in the dead of winter is liberation from cold, gray days and a drumbeat of political coverage related to the upcoming caucuses. Moreover, they hadn’t been there since George Bush was president—the first one.

So it was not a surprise to this former Iowan that the yellow-and-black shirts in the stadium on January 1 outnumbered Cardinal ones (although not by much, considering the Hawkeyes’ fan base encompasses an entire state). This was more than a game for the wearers of those shirts—this was the State Fair, minus the butter cow.

I was torn between two impulses—wanting Stanford to win but wanting Iowa to fare well in front of millions of TV viewers. I was hoping for a final score of, say, Stanford 35, Iowa 20. Close enough to be respectable for our Midwestern visitors, but enough of a spread to avoid that squirmy angst of our past two Rose Bowls.

And then the game started.

Before Christian McCaffrey had even reached the end zone on that electrifying first play from scrimmage—a 75-yard catch and sprint—I had abandoned all pretension about my previous allegiance to the Hawkeyes. Forget this business of a respectfully close outcome—I wanted a full-on blowout.

Right away, here came another touchdown drive, featuring McCaffrey’s exquisite artistry, capped by senior quarterback Kevin Hogan’s 8-yard run. And then just when it looked like Iowa might be recovering—they strung together several first downs and moved into Stanford territory—freshman Quenton Meeks intercepted a pass and outraced pursuing Hawkeyes to the end zone to put the Cardinal ahead by three TDs. 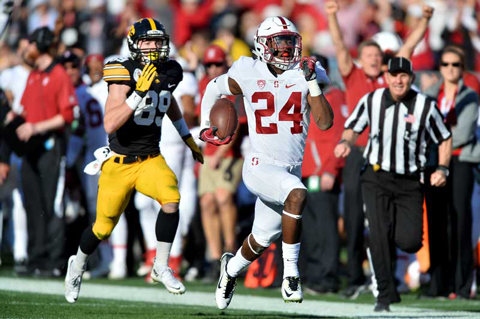 A few minutes later, McCaffrey gathered in a punt and juked and jived his way down the field leaving multiple Hawkeyes in his wake. Throughout the day, McCaffrey’s twisty moves made defenders look like their cleats had been replaced by skates—anyone trying to corral the speedy sophomore in the open field was putting his dignity at risk.

By this time, it was fairly clear that Iowa was overmatched. My brother, who lives in Des Moines, had sent me a good-natured “Go Hawks!” text just before kickoff. Now he texted me again: “This is ugly. Go home.”

The ugliness for Iowa got downright hideous. Hogan threw a touchdown pass to senior wide receiver Michael Rector after pretending to fumble the ball—a play the Cardinal had practiced earlier in the week. At halftime the score was 35-0, the most lopsided first half in Rose Bowl history. Although my blowout scenario had been realized, compassion (or was it sentiment?) eventually encroached on my glee—when Iowa kicked a field goal midway through the third quarter and thus avoided a shutout, I cheered.

The narrative of this 102nd Rose Bowl will focus on McCaffrey, who set a new record for all-purpose yards with 368 and wowed a national television audience. ESPN commentator Kirk Herbstreit was among the astonished. “It’s almost like watching a peewee football game where there is one guy who never gets tackled because he’s better than everyone else,” he told viewers, many of whom, like Herbstreit, were seeing McCaffrey for the first time. “The kid’s a freak.” 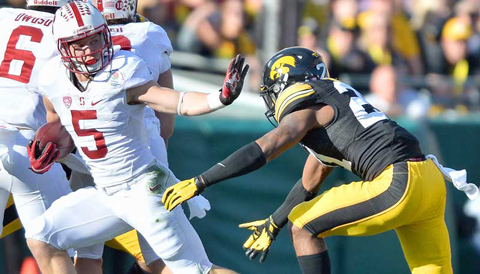 Sophomore Christian McCaffrey on his way to the end zone.

But there were other stories. Bill and Illina Leff of San Clemente were there to see senior offensive lineman Kyle Murphy, whose family are longtime friends of the Leffs. Illina’s favorite moment came before the game even started—Murphy was one of four Stanford captains who walked to the center of the field for the coin flip. “I think I’m going to cry,” she said.

For 1968 Stanford alum Bill Jessee, who flew in from Shrimp Island, N.C., the game was a chance to reconnect with the school and an experience that shaped the person he is. “I was expecting to go to Caltech, but got a better scholarship offer from Stanford,” he recalled, peering through Nerd Nation eyeglasses. “I accepted it without even visiting the campus. Best decision I ever made.”

The football program was in decline during most of Jessee’s time on the Farm—“We gave new meaning to the term moral victory,” he said. He had never attended a Rose Bowl and decided he shouldn’t wait any longer. And besides, he was part of the earliest cohort of Stanford Band musicians, so the halftime show would be a bonus for him (but not for Iowa fans seated nearby).

As for me, the first meeting ever between Stanford and the University of Iowa football teams offered a realization. I’ve been at Stanford for 17 years—almost as many years as I lived in the Hawkeye state. Considering my delight at the final score—45-16—I’ve left my childhood behind in more ways than one.

You Call That Music?