Disgusted by the TV shows aimed at her preteen son, an options trader becomes an impresario. 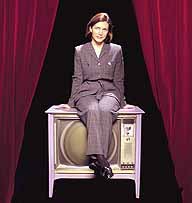 Options trader Libby Pratt seems oblivious to the chaos on the floor of the Pacific Exchange in San Francisco. All around her, red-faced men bark out orders to buy and sell. Pratt, who prefers not to yell, busily taps her bids onto a touch-activated computer screen.

When the bell rings to close the day’s trading at 1 p.m., Pratt slings a green backpack over her shoulder and walks a block up Montgomery Street to a place she’d rather be. Globalstage Productions is a company she founded as much to stretch her own mind as to encourage children to do the same.

Globalstage produces and sells videotapes of live theater for children. The target market: parents of 7- to 14-year-olds who crave an alternative to mainstream video and television. Since its launch in April 1997, the company has put four shows on tape: Frankenstein and Pinocchio, both performed by Stage One of Louisville, Ky.; Cyrano, performed in English by Blauw Vier of Belgium; and Far From the Madding Crowd, performed by Snap People’s Theatre of England. Globalstage plans to produce two additional videos this year -- and six more in 1999.

Raised in rural areas of Ohio and Montana, Pratt, ’81, describes her childhood as “culturally deprived.” That changed when, as a Stanford student, she spent a quarter studying in Florence, Italy. She reveled in the “gorgeous architecture and sense of history.” These days, she gets her cultural fix by traveling around the United States and Europe with her 12-year-old son, Preston, scoping out the best in kids’ theater. Pratt’s looking for more than great shows; she also wants strong female leads, prominent roles for minorities and stories that parents as well as children can enjoy. But Preston gets the final say. As he puts it, “I greenlight everything.”

Each tape opens with a preface from Elizabeth McNamer, a professor of religious studies at Rocky Mountain College in Billings, Mont., and a close friend of Pratt’s. She discusses the playwright’s life and times and the major themes running through the play -- topics also covered in a booklet that accompanies each video. Preston co-stars in the intro, playing the role of the unassuming student and asking questions on behalf of kids.

After a show is selected, a crew from the British Broadcasting Corporation comes in to shoot the video. Under the supervision of J. Clements, MA ’87, Globalstage’s production director, the crew tapes dress rehearsals as well as performances. Almost everyone involved -- from set and costume designers to actors, playwrights and composers -- earns royalties on sales of the videos, which go for $27 each, or a series of six for $135.

Globalstage so far has 1,500 subscribers -- but will need 10 times that to break even. (Pratt says she’ll quit her “real job” when the count hits 4,500.) To drum up business, Pratt advertises (New Yorker, Working Mother, Sunset) and pushes sales through the Book-of-the-Month Club and Barnes & Noble catalogs. She’s considering new outlets for the shows, including CD-ROM and public broadcasting stations.

Start-up costs will total roughly $1.5 million by December of this year, an amount funded completely by Pratt and her husband, options trading partner Craig Resnick, the company’s chief financial officer. That makes Globalstage a bigger single gamble than any trade Pratt has ever made on the Exchange.

So why take the risk? Pratt, who had just turned 40 and had long wanted to start her own business, was growing disgusted with the choices Preston had on TV. “What bothered me most was when he’d sing the commercial ditties,” says Pratt. “I didn’t want my child to be fodder for that.”

Even a live-theater purist has to admit the taped performances have some advantages. Viewers get close-ups of special effects (such as the throbbing heart in Frankenstein) and facial expressions they might otherwise miss -- even from the best seats in the house. But Pratt wants to make one thing clear: “We’re not trying to replace live theater. We’re trying to excite people to go to live theater,” she says. “What theater makes you do is use your mind.”

The big question still remains: will kids watch this stuff? Some distributors have criticized the shows as “too advanced” for children. Indeed, one mom -- Vera Aronow, a documentary producer in Nyack, N.Y. -- watched Pinocchio and pronounced it too sophisticated for her 8-year-old daughter, Alexandra. “The language was a little old, especially in the introduction, where they talked about themes like responsibility and schooling,” Aronow says. But Alexandra offers a different opinion. “I loved it,” she says. “It was really cool.” The third-grader liked the play even better than Disney’s movie version because “it was real people acting.”

If Alexandra and her mom are any indication, Globalstage’s biggest challenge may not be winning over a generation of children raised on Barney and Friends and The Little Mermaid. The key may be convincing adults that kids are able -- and willing -- to use their brains. “Maybe I’m an idiot for doing it,” says Pratt, “but I’m making the assumption that kids are much smarter than anyone assumes.”

Leslie Lamarre is a freelance writer in Burlingame, Calif.

A PhD candidate discovers the pressures -- and pleasures -- of being a teaching assistant.

The Will to Walk