Cheering for Their Student-Athletes 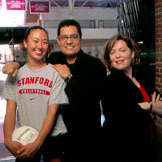 He knew she was captain of the women's volleyball team. And now political science associate professor Luis Fraga knows what that means for Lindsay Kagawa.

"He got to see a little bit about the inner workings of the team, and now maybe he understands why I've sometimes had to miss a class--because we start to get ready for a 7 o'clock home game at about 3," Kagawa, '01, says about her adviser. "Mostly, I was really excited that Professor Fraga was the first one to come."

Fraga was, indeed, the first faculty member to accept an invitation from assistant coach Kim Oden to join the women's volleyball team for an afternoon this season.

A public policy major, Oden, '86, was a two-time Olympian who captained the women's team that won a bronze medal at the 1992 Summer Games. At Stanford, she was twice named ncaa Volleyball Player of the Year by Volleyball Monthly. Oden won Academic All-America honors in 1984 for her scholarship and in 1990 was named Player of the Decade by the American Volleyball Coaches Association. She still holds the Cardinal single-match record for most blocks (16).

"I can look back and remember professors I had--Philip Zimbardo, Donald Kennedy and Roger Noll," Oden says. "Denise and I hear students raving about their own professors all the time, and we thought it would be neat for our players to be able to spend some time with faculty--and also neat for professors to get a firsthand view of the other responsibilities their students have."

Oden e-mailed team members to ask which faculty members they'd like to invite to practices, and the names she got in response made up an interdisciplinary roster: Donald Barr, ms '90, PhD '93, lecturer in human biology; Robert Negrin, associate professor of medicine; Roger Noll, professor of economics; Rob Reich, MA'98, PhD '98, assistant professor of political science; Bob Simoni, professor of biological sciences; Stephen Stedman, '79, ma '85, PhD '88, senior research scholar at the Institute for International Studies; Giovanni Tempesta, lecturer in French and Italian; and Philip Zimbardo, professor of psychology.Fraga and his wife, Charlene Aguilar, RSVP'd for the September 22 opener against the University of Southern California, which the Trojans won 3-0. The couple dined with the team on chicken and pasta in the Arrillaga Sports Café and sat in on the pregame practice.

The pace of drills is frenetic when the Cardinal women touch down on the courts. There are 50 or 60 glacier-white balls in the air at any one moment--ricocheting off outstretched palms, rising in graceful arcs from backline serves, drilling onto the floor.

Shouts of "Mine!" rebound around the gym as defensive players dive under the nets, digging for spiked balls, and come up in rolling somersaults. And as setters and outside hitters keep the balls flying overhead, they also make time for high fives to one another and are quick to reward a deft kill.

"What I had not expected was to be as overwhelmed with the commitment that the coaches and athletes show for one another," Fraga says about the action he and Aguilar saw. "The concentration and energy are awesome, but it's a team where commitment is paramount."

Fraga has sat on the sidelines with the football team, and he regularly participates in the annual breakfast for football recruits and their parents that biologist Bob Simoni organizes at the Faculty Club. Fraga estimates that his department graduates 15 student-athletes in every class of 100 political science majors, and he ticks off the sports with pride--women's softball, synchronized swimming, football, baseball, men's and women's basketball.

While he occasionally has asked coaches to supervise test-taking when athletes are on road trips, Fraga says most students prefer to complete the work before they leave town, so they can concentrate on playing.

"I wasn't surprised to learn that Lindsay was team captain," he says about Kagawa, whom he met when she took his urban politics course as a freshman. "She's always had a lot of leadership potential, and I knew she also had a very serious commitment to the team being successful."

After the practice, Fraga and Aguilar listened to strategies at the locker-room chalk talk and then sat next to the team on the floor at Maples Pavilion for the entire match.

"The most surprising part was realizing, after being there a few minutes, how much the floor moves," Fraga says about the parquet in Maples. "I guess that's a virtue."

The four-time NCAA champion Cardinal finished last season 31-3 and this year will play nine matches against opponents in the top-ranked 15 teams. Perhaps because the opening of the season coincided with televised coverage of Olympic performances by Cardinal Kerri Walsh, '00, and returning sophomore Logan Tom, players were visibly jazzed about the matches to come.

"We're really working hard to be national champions, and we sometimes miss out on the student part of being student-athletes," says Kagawa, the starting setter. "So having some of our professors on the bench with us really contributes to our overall academic experience."

I may be new to Stanford, but I know all about 'the farm'

In a Class by Themselves

A wave of homeschoolers has reached the Farm--students with unconventional training and few formal credentials. What have they got that Stanford wants? And how do admission officers spot it?