As a Boy, He Found Reading a Misery. Now The Stock Market Tycoon Is Using His Fortune to Help Kids With Dyslexia. 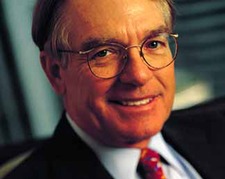 He has the cheerful self-assurance of a man accustomed to success. At 61, he heads the nation's first and largest discount brokerage, overseeing more than $500 billion in assets. His second book, Charles Schwab's Guide to Financial Independence, was a best-seller in 1998. Stanford's capacious new center for business students, opened in 1997, bears his name as its benefactor. His smooth, ad-friendly face suggests a man 20 years younger.

But there is pain behind the smile. As a Sacramento Valley schoolboy, Schwab began a lifelong struggle with the written word. He recalls relying on Classic Comic Books just to make his way through his reading assignments. As a Stanford freshman, in 1955, he was "completely buried," flunking both French and freshman English before finding refuge in economics.

Even now, Schwab, '59, MBA '61, finds reading and writing tedious at best. He once confessed to a reporter that he had attempted to read the novel Shogun six or seven times. "When I read, I can feel myself converting the written code into sounds [with my mouth] before I can process it," he explains. "Fast readers don't go through all that."

Like some 24 million other Americans, Schwab copes with dyslexia. The condition -- characterized by unusual difficulty sounding out letters and distinguishing words that sound similar -- is by far the most common language-related learning disability. Scientists have yet to pinpoint its cause, but this much is certain: with appropriate assessment and timely phonics-based instruction, most children with dyslexia can learn to read and write proficiently -- and the earlier intervention takes place, the better. It's a message that Schwab, with all his fortune and marketing savvy, has been eager to bankroll.

Schwab dresses impeccably but projects an easygoing, approachable personality. Indeed, he says, it was his knack for schmoozing that helped him through those tough early years at parochial school in Woodland, Calif., just north of Davis.

Back then, Schwab recalls during an interview in his sunlit 28th-floor office in San Francisco, nobody knew much about dyslexia. His parents seemed to ignore his difficulties entirely, while the "wonderful but strict" nuns who taught at his school just thought he was slow. To master his reading assignments, young Chuck plowed through Classic Comic Book versions of Ivanhoe and A Tale of Two Cities. "I bluffed my way through much of it, I'm sure," he says. "Fortunately, I have a pretty 'up' personality, and that helped me all the way through. I tried hard and I had pretty good communication skills, so I could persuade my teachers that I was a pretty good kid."

Buoyed by strong math and science scores, Schwab was admitted to Stanford, joining the first residents of Soto House in Wilbur Hall. It was only then, as a freshman, that he began to realize the full extent of his difficulty with written expression. English A was "a disaster," he shudders, and French was like medieval torture. "To sit down with a blank piece of paper and write was the most traumatic thing that had ever faced me in life," he recalls. "I had ideas in my head, but I could not get the stuff down. It was a crushing time."

With the help of sympathetic roommates and prepared course notes, Schwab pushed through his undergraduate years, focusing on the quantitative and technical subjects that were his strength. Always entrepreneurial (as a kid he hatched a profitable business selling chickens and eggs), Schwab found his niche in economics. He picked up speed in the Graduate School of Business. "I never perceived of myself as stupid; I can't explain why," he says. "I just thought that if I worked harder, maybe something would happen."

Ten years out of school, something did happen. By then a seasoned mutual fund manager, Schwab borrowed $100,000 from an uncle to start what would become the country's first discount brokerage firm. Its philosophy -- that the stock market should be accessible to everyone -- proved enormously popular. By the time The Charles Schwab Corp. went public in 1987, it had a market capitalization value of $400 million. In January, that figure was up to $23.1 billion -- and counting.

As his business grew, Schwab became more adept at compensating for his dyslexia, relying heavily on personal computers and dictation in his daily routine. Yet he never truly understood the root of his difficulties -- until his youngest son, then 8, started having similar problems in school. A long round of testing ensued, and by the time the boy was diagnosed with dyslexia, he was already two grade levels behind in reading. "It was a bewildering time," Schwab's wife, Helen, recalled in a 1995 Los Angeles Times interview. "It's scary when you think there's something that can be done for your child but you don't know what it is, and there isn't one place for you to go to for help."

Today, the Schwabs' son is a college student, learning to cope, as his father did, with the rigors of academic work. But many other families are just beginning their struggles -- and that's where the Schwab Foundation for Learning comes in. Nine years ago, Charles and Helen Schwab founded the nonprofit to provide guidance for parents and teachers of children with all kinds of learning "differences" (a term they prefer over "disabilities"), from persistent difficulties in reading and math to attention deficit disorders.

"Out of our own early trauma, we thought that a resource center might be beneficial for other parents, to help them understand these problems," Charles Schwab explains. "That way, they can learn to become advocates for their own children. You can't just sit back and let things happen, or the kid can be lost."

Like Schwab's brokerage offices, the foundation gives people easy-to-understand information to help them make their own decisions. With an annual operating budget of $3 million, the center serves about 1,000 families a month. There is a $15 annual membership fee, with waivers available when needed. Offerings include a 2,200-volume lending library, the largest of its kind in the country, as well as databases listing tutors and testing specialists (the center does not provide these services itself), a web page, and consultations in person or by phone. The 25-member staff consists largely of retired special-education teachers hand-picked for their expertise and supportiveness.

"We go through a lot of Kleenex here," says executive director Alexa Culwell, walking a visitor through the center's pleasant office suite in San Mateo, near the Bayshore Freeway. A typical distress call from parents, she says, might be anything from "I'm suspecting my first-grader has this problem, and my husband seems to think he'll grow out of it" to a request for a list of local tutors or a school referral. "This is a place that can help you along in the journey and make you feel like you're not crazy."

The foundation's most ambitious outreach project is a recently launched National Advertising Council campaign aimed at parents of primary-grade children. Public service announcements, co-sponsored by the Tremaine Foundation, are punchy and provocative. They urge parents to contact the center's toll-free number or website for more information.

Beyond a free brochure, Culwell and her staff have assembled a $20 packet, "Bridges to Reading," that offers tips on helping children with reading difficulties. In the case of dyslexia, for example, the latest treatment techniques help students to distinguish the different sounds that make up language or to learn through touch -- making letters out of clay or writing them in sand. Older students with dyslexia often can be aided by word processors with spell-checking and speech-recognition software.

For teachers, the foundation offers a free 40-page booklet spotlighting the work of five Bay Area educators who have received the Schwabs' $15,000 TeachEach awards for their innovative efforts to reach all kinds of learners. Like all good teachers, winners of the TeachEach award recognize that there are different kinds of intelligence and that what works for one child may not work for another. It's a truism that Schwab knows only too well.

"I remember some of the most brilliant people at Stanford who were scholars and got incredible awards of recognition," he says, "but they had no clue about how to get out of a wet paper bag socially. In my case, I knew I wasn't that smart, in English anyway. But I've always felt that I had very strong conceptual capabilities. I could imagine things much faster than some other people who were stuck thinking sequentially. That helped me in solving complicated business problems. I could visualize how things would look at the end of the tunnel."

Educating the public about learning differences isn't easy. Although many people with dyslexia have gone on to successful careers (Agatha Christie, George Patton, Robin Williams and Albert Einstein, to name a few), a recent Roper poll showed that 80 percent of the public and 60 percent of teachers still mistakenly associate learning difficulties with mental retardation.

The recent "epidemic" of learning disability diagnoses -- the National Institutes of Health say as many as 15 percent of American young people are afflicted -- has fueled controversy among educators and parents. Some believe the growing number stems almost entirely from an abandonment of phonics (sound-based reading instruction) in the early grades. Others suspect it has more to do with television-induced laziness or hyperanxious yuppie parents trying to make excuses for poorly performing kids.

"The misperceptions are unbelievable," Schwab muses. "I'd just like to stress how real this issue is."

Schwab likes to compare children with learning problems to Casey Martin, '95 -- the former Stanford golfer who successfully petitioned to use a cart on the pro tour to help him cope with a congenital leg condition. "Martin can still play golf at a very high level, but he has a real physical impairment that prevents him from walking a golf course," Schwab explains. Likewise, he says, it is becoming clear that many, if not most, students with diagnosed learning disabilities have a real physiological problem. That doesn't mean that they can't function competently as they become adults; but the reality is that kids with learning problems are twice as likely to drop out of school. And a disturbingly high number end up with criminal records. "If we don't handle these things right," Schwab says, "it's a real problem for society."

Mitzi Tanaka is one parent who averted disaster. She came to the resource center after her son, Justin, started having reading problems in first grade at a private school. Counselors at the center recommended some tests; and through the lending library, Tanaka was able to evaluate other schools, using worksheets provided by the center. "It turned out that the best place for my son was a public school right in our own district," Tanaka marvels.

Today, her son is a "totally mainstreamed" ninth-grader who was nominated twice last school year as Student of the Month. He's also probably one of the few teenagers who keeps an autographed photo of Charles Schwab in his room, right next to his baseball trophies.

Theresa Johnston, '83, is a Palo Alto writer and a frequent contributor to Stanford.

Is Your Child Dyslexic?

Is Your Child Dyslexic?

I Think, Therefore It's Ham