Can She Clear Up the Budget Mess? 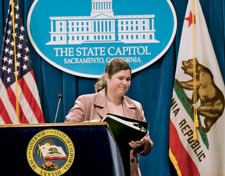 Ana Matosantos once thought she would become an engineer. And sometimes, when she is talking about California's budget, she sounds like one.

In public, Matosantos—the first state director of finance to serve two governors from different parties—is scrupulously dispassionate about the state financial crisis that brings out fiery emotions in others. A Democrat who comes from an activist liberal background, Matosantos, '97, is presiding over cutbacks in programs and services that associates say she cares deeply about.

But, she says, her job is to evaluate the budget objectively—as if it were a giant, multidimensional puzzle, as much geometry as algebra. "Since I was a little kid I have always enjoyed understanding how things come together," she says in an interview. The budget is "about trying to understand how the different pieces fit together and interrelate and affect each other, helping lots of folks with lots of different perspectives on issues figure out a common policy plan and priorities for the state."

Matosantos, 35 and the youngest person to serve as California's budget director, worked in this role in the final year of former Gov. Arnold Schwarzenegger's administration before Gov. Jerry Brown asked her to continue in the job. It's been her duty to advise the governor on how best to close a $26 billion gap between the revenue the state expects to collect in taxes in the coming year and the expenses that are projected for the coming 12 months.

It's a tough role for someone who cut her teeth as an advocate for a public interest law firm and who was an official in the Health and Human Services agency in 2004, during the first harsh rounds of budget cutting. "I think about when I first went over to the agency, the ideas on the table then, really difficult things to happen and really difficult to think about people living with those reductions," she says. But those cuts have long since been implemented, and more stringent ones went into effect when a budget deal was signed June 30. On the day of the signing she could recite the new cuts—stipends for the disabled, grants to single mothers, services for the homebound—but her personal feelings weren't for sharing. "The moment somebody elects me to something is the moment my personal opinion is relevant," she said.

Such discretion helps explains why she has a sterling reputation for working well with people from all parts of the ideological spectrum. She tracks information about hundreds of programs and thousands of options, sifting through them before they move on to the governor's office. In a place where information is power, she's one of the most powerful people in Sacramento.

Michael Genest, a Republican who was Matosantos's boss as finance director under Schwarzenegger, has known her since 2003, when both worked in the state senate. Genest says Matosantos makes a fine advocate—he remembers times she bested him in internal debates in the governor's office—but he respects her uncanny ability to examine issues from many different angles.

His first real interaction with Matosantos came when he needed to develop a Republican alternative to a Democratic proposal. Matosantos, seeing that he was short on time, offered to do it. Her work was first-rate. "I was grateful and impressed," he says. "It's not so easy to see something from two diametrically opposed views and get it right from both directions."

When he left the Schwarzenegger administration, Genest recommended her. "She demonstrated her acumen with the entire budget, way beyond the health and welfare issues she started with. She has about the sharpest learning curve of anyone I have ever known."

As a child in Puerto Rico, Matosantos loved to sail. As a teen, she learned to fly small airplanes as a way to overcome her fear of flying in commercial jetliners. She chose Stanford over Ivy League admission offers in part because she enjoyed what she saw as its geeky, rather than snooty, brand of intellectualism.

She eventually chose political science and feminist studies over engineering and went to work for Equal Rights Advocates in San Francisco. In 1999 she became a fellow in the state legislature. "I was supposed to be here 10 months," she says, more than a decade later.

She grows animated when she talks about the budget process, about how much she enjoys sifting through ideas, asking questions, synthesizing the recommendations. She asked for the study examining how much the state was spending on cell phones, a move that led Brown to force employees to forfeit nearly half of them. The action saved the state $20 million—a tiny amount in an $86 billion general fund—but it struck a chord with voters.

Matosantos has long lived with her partner, Sally Espinoza, a former public defender who now handles appeals in the attorney general's office. The two missed the "window" to marry during the brief time that same-sex marriage was legal in California before it was outlawed in 2008 by Proposition 8. Instead, they planned a commitment ceremony for fall 2010, safely outside the time when the state budget is typically completed.

Then last year's stalemate turned into the longest ever, and the Legislature didn't pass the budget until October 8, two days before the ceremony was to take place. With family and friends in California from around the world, the state's finance director let it be known that if the budget weren't done in time, it would need to be move on without her. "There are certain things," she says, "you don't reschedule."

Daniel Weintraub is editor of the California Health Report at healthycal.org.

Show Me the Money

Show Me the Money

Riding in Style? Not So Much

Lately, American carmakers are getting their groove back.