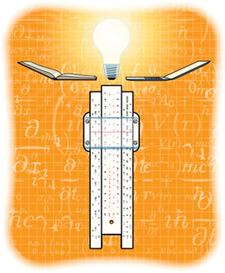 It'll take some doing, but Stanford aims to put a T in "engineer"—not an easy fit.

The School of Engineering sees the task as its signature challenge in a rapidly changing world. It wants to reformat students of all shapes and sizes, intellectually speaking, into people who envision themselves as capital Ts—vertically supported by strong math and science training but stretching laterally with extensive business and communication skills. The prototypical 21st-century engineer, says Dean James Plummer, will be someone who combines a deep grounding in the technical fundamentals with an entrepreneurial outlook and an instinct for lifelong learning.

To foster that, Plummer says, "we are pushing the bounds of an engineering education." And that can be tough going, in part because everyone from accrediting examiners to each new wave of students must be willing to buy into some edgy rethinking. Stanford offers and promotes a prominent set of nontraditional courses, such as those involving design-based problem solving—but as electives that have to win acceptance as professionally valuable.

Can an exceptional technical curriculum be combined with a broad interdisciplinary mindset? It has to be, asserts Plummer.

"The half-life of engineering information is probably three to five years," says Plummer, citing the furious pace of technological advances. "We need to teach students how to keep learning. . . . They may even change technical fields multiple times."

Engineers who once would have remained employed for decades with the same large companies now require the business and collaboration skills to work effectively in the small firms and start-ups of the so-called new economy.

Careers will be spent in a global environment, with an international set of customers and clients. Engineers who find themselves living in different parts of the world will benefit from an understanding of diverse cultures and people. With that in mind, a summer internship program places students with companies in China for nitty-gritty experience.

Engineers aspiring to leadership positions will compete in creativity and decision-making abilities as well as technical knowledge and business smarts. And there are ways to tailor undergraduate programs to enhance those qualities, says Plummer.

But every serious effort to integrate all these skills, notes Plummer, is susceptible to "real resistance against cutting into the technical part of the education." Four years ago, he points out, his school's increasing focus on a less traditional approach complicated its accreditation, although the maximum six-year renewal was received.

Thomas Stahovich, an associate professor of mechanical engineering at UC-Riverside, has written about the issues involved in remodeling engineering curricula. He sees the right balance of vertical and horizontal ingredients at Stanford.

"Both skill sets are essential for students to be able to put their knowledge into practice," he said by email. "Stanford's approach of infusing the curriculum with an emphasis on communication skills, innovation, international experiences, teamwork skills and the like should be quite effective at producing engineers who can make an impact on the world."

To implement its vision, Engineering particularly looks to two buzz-worthy assets: the Stanford Technology Ventures Program and the Hasso Plattner Institute of Design, or d.school, which uses interdisciplinary teams of faculty but was organized within the school.

The STVP curriculum, which emphasizes entrepreneurship and innovation in high-tech ventures, draws more than 1,000 students a year to its elective courses. Co-director Tom Byers, a professor of management science and engineering, and executive director Tina Seelig received the National Academy of Engineering's top award for teaching last year.

The d.school, headed by mechanical engineering professor and design-firm IDEO guru David Kelley, encourages the notion of tackling "nearly any challenge" with collaborative expertise. This spring, it moved into renovated space where expansive, highly adjustable work areas reflect the same spirit of innovation as the design projects.