California s lieutenant governor is aiming for the state s top job. After 23 years of striving, is it his turn? 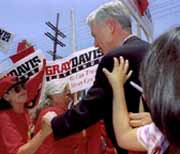 Gray Davis has a reputation for being, well, boring. Gray. A middle-of-the-road Democrat, he’s known for his determination, discipline and hard work. Even his golf game is slow and steady. “You can’t get too excited or too down,” he says. “You’re going to have to play the next shot no matter how good or bad the last shot was.”

He has served comfortably in the shadow of two California governors -- Jerry Brown (as chief of staff from 1975 to 1981) and Pete Wilson (as lieutenant governor since 1994). Now he may be on the verge of being elected governor of California himself, and he doesn’t mind a bit if you call him boring. In the last four gubernatorial races, he contends, the most charismatic candidate lost every time. “People don’t care if you’re boring,” he says during a break in a meeting with an Oakland firefighters’ union. “They care if you’re good.”

Davis, ’64, is about to find out just how good the voters think he is. As his party’s nominee for governor, he’s running against Dan Lungren, the Republican state attorney general. With just a few weeks to go until the November election, the race is expected to be close. As Davis crisscrosses the state and spends millions on television ads, he hammers home the linchpins of his campaign: save California’s public schools, protect the environment and preserve a woman’s right to an abortion.

Davis has wanted to be governor for at least two decades, ever since he worked for Brown. (He likes to joke that he has spent 23 years trying to traverse 15 feet.) His striving is relentless. He routinely works 13-hour days; he even met his wife, a former flight attendant named Sharon Ryer, while flying around the state on official business in 1978. They married in 1983.

On a typical Thursday morning in early July, Davis’s schedule is bulging. First he speaks to a group of businessmen, the Bay Area Council, in the Clorox Co. offices in Oakland. Next he squeezes in a session with the local firefighters’ association and, at noon, an interview with a journalist. Later that afternoon, he flies back home to L.A., where his campaign is headquartered, for a strategy session with some D.C. consultants that will last through Friday. Saturday is Independence Day, but instead of taking some time off with family and friends, Davis is stumping in Central Valley farm country.

He is just as disciplined in personal matters. Trim and neat as a pin, Davis walks with his wife around their Los Angeles neighborhood or works out in the condo gym every morning. In college, his Zeta Psi frat mates called him “Green Goddess,” after the salad dressing, because he used to slick down his hair with pomade. (The rest of the Zeta Psis were “slugs,” adds Charles Bonner, ’64, a Fresno businessman and one of Davis’s former roommates.)

Over the years, Davis has been criticized for taking easy positions designed to increase his popularity. As a state assemblyman, for example, he wrote a bill to eliminate asbestos from public schools and led the campaign to place the pictures of missing children on milk cartons. (At least a dozen kids were found as a result.)

But he has weathered his share of political battles. He supported controversial legislation that would guarantee pensions for spouses of police officers killed in the line of duty. The bill was opposed by Republicans and vetoed by Wilson. As lieutenant governor, he has fought for affirmative action and succeeded in lowering state university student fees. His stands have helped him forge strong ties with labor unions, women’s groups, environmentalists and veterans.

Davis paints himself as a problem solver, someone who can find common ground between warring parties. But he says he’s willing to take an uncompromising stance when necessary. “On issues such as water, transportation and education, it’s essential that we do that,” he says, avoiding the “I-word” that his mother told him never to use.

His single-minded pursuit of perfection may have something to do with his parents. His father, an advertising salesman for Time magazine, was an alcoholic. His mother criticized whatever he did.

Born in the Bronx, N.Y., Davis attended a string of private schools across the country. When he was 11, his family moved to Los Angeles. At Stanford, he was on the golf team but not involved in student politics. He spent most of his time studying and playing golf, recalls Frank Dubofsky, ’64, another frat brother, who now practices law in Boulder, Colo. Davis went on to get a law degree at Columbia and, in the late ’60s, served as an Army captain in Vietnam, earning a Bronze Star. The experience sparked his interest in politics.

“It occurred to me that everybody was not pitching in, that the burden of the war was falling on minorities and people without a college education,” he says. “I thought that was wrong.”

When he returned to California, he practiced law for two years and served as campaign finance director for Los Angeles Mayor Tom Bradley. He ran for state treasurer in 1974 but came in third. That’s when he joined Jerry Brown’s campaign for governor, where his biggest challenge turned out to be organizing the perpetually unpunctual candidate. Brown won, and Davis followed him to Sacramento.

In the 1980s, Davis served in the state Assembly and as state controller. In 1992, he ran for the U.S. Senate, but lost to Dianne Feinstein, ’55, in the primary when his negative ad campaign comparing Feinstein to Leona Helmsley backfired. In 1994, he was elected lieutenant governor, California’s version of the second-in-command. He fills in when Wilson is away.

Now the voters will have to decide whether Davis or Lungren will occupy that office full time. On many issues, the two are not very far apart. Both say they want to fix California schools. Both take a hard line on crime; both back the death penalty. Where they clash most visibly is on abortion: Lungren is pro-life, Davis pro-choice.

The winner in November could have a lasting influence on California’s future. There are judges to appoint and budgets to propose. And the next governor will play a role in carving up the state into new voting districts after the 2000 census. Reapportionment could swing the state right or left for the next decade or so.

Winning the race will not be any hole-in-one for Davis. But he’s proved to be a steady competitor in a very long game. How long? At the age of 10 or 11, Davis created an anniversary card for his parents in the form of a “proclamation.” He signed it, “Governor Joseph Graham Davis.”

Cate T. Corcoran is a freelance writer in San Francisco.

Facts and figures from the Farm and beyond