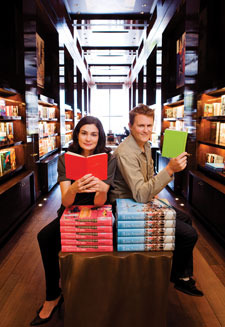 Some lives seem to fall neatly into a narrative.

Otis Chandler, whose first literary love was the Hardy Boys mystery series, grew up to work as a programmer for Tickle.com, an early social-networking site, and then for the dating site LoveHappens.com. Elizabeth Khuri-Yakub, who became infatuated with reading and writing through Heidi, eventually became a journalist for the Los Angeles Times, which Otis's family once owned.

And when they met through a mutual friend in 2001, the stage was set for that most modern of American love stories:a courtship entwined with the birth of an Internet startup.

In December 2006 (a month after they became engaged), Otis, '00, and Elizabeth Chandler, '99, founded Goodreads.com, hoping to convert self-identified book-lovers into a profitable social-networking site. The site lets friends—and unacquainted bookworms with similar tastes—share the titles in their libraries and their personal reviews of books.

Otis conceived and planned the site with Elizabeth's help as a sounding board, writer/editor and tester. He had noticed a growing fragmentation in dating sites (think of JDate.com and BlackSingles.com) and wondered if readers weren't a similar niche. He loved to talk about books with friends and relied on their evaluations more than formal reviews. "I would hear about a book and put it on my Amazon Wish List," he recalls, sitting at a folding table in the meeting room of Goodreads' office in Santa Monica, Calif. "I thought that if I could share my wish lists with other people, that would be social and that would be valuable data."

It was. Some five years after it launched and about 18 months after it picked up $2 million in venture funding, Goodreads has 6 million registered members. The business plan assumed—correctly—that publishers and authors would jump at the chance to buy ads on a site that lets them market directly to readers who have expressed interest in specific types of books. The site's tool chest expanded last year when Goodreads bought DiscoverReads.com, whose algorithms generate suggestions for users based on books they have liked previously and that have been liked by other users with similar tastes. (Consider it the literary equivalent of music-recommender Pandora or the film-advising aspect of Netflix.) The addition of a recommendation engine resulted in a 60 percent increase in the number of titles added to users' reading lists.

With several hundred thousand books published each year (including the rapidly growing world of self-publishing), figuring out what to read can be a challenge. The "crowd sourcing" at Goodreads helps people "sort through the books and figures out what's actually going to get you excited enough to pick up a book and read it," Otis says.

He's also discovered an unexpected benefit of loading one's library of titles onto a personal Goodreads page. "You relive your life by doing that," Otis says. "You add Dune and you think, 'I read that book in junior high. Man, I was such a geek back then.' And you kind of relive who you were. The books you read kind of define the stages of your life."

Neither of the Chandlers was looking at a future in the web world when they were at Stanford (where Elizabeth's father, Butrus T. Khuri-Yakub, is a research professor in electrical engineering). Otis studied mechanical engineering and "thought I wanted to build cars one day." Elizabeth majored in English and "wanted to write." She's now editor of the site's monthly newsletter, whose author interviews, trivia, prepublication reviews, listings and giveaways promise "the latest and greatest in our quest to connect people through reading."

Even as it grows, Goodreads remains a relative bit player in online social networking. "I believe the big player in the arena, Facebook, will subsume any such targeted interest and, more importantly, provide a broader base for interaction with one's social connections," says Peter Sealey, founder of The Sausalito Group marketing firm (and an investor in Facebook). The 800-million-unit gorilla in the room, Facebook can add a Goodreads-size audience every few days.

But the Chandlers see advantages to running a site targeting a niche like book lovers. "A lot of people on Facebook would not want to be a friend with their mother," Otis says. "On Goodreads, you're just sharing books, so you can be friends with your mother—there's no drunk photos of you."

Scott Martelle, a writer based in Irvine, Calif., is author of The Fear Within: Spies, Commies, and American Democracy on Trial.

The Founders, According to Goodreads' Stats (As of December 2012)

The Sounds of Science

The campus you love will give way to a campus you'll get lost in.