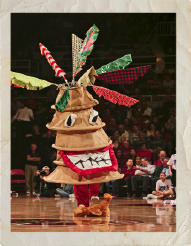 I’ll cut to the chase: I’m pining to be the Tree. I’m not a hyperactive senior; I’m a Stanford grad and a journalist at your alumni magazine. And after five years of trying to walk, skip and prance a mile in someone else’s tree trunk, all I have to show for my efforts are the rings under my eyes. I’m getting too old for this mulch.

My pursuit of coniferous grandeur began in 2004, after writer Alysse Minkoff spent a day as UCLA’s Josie Bruin. My editor smelled blood—specifically, the superficial facial injuries Minkoff sustained while bouncing around in a giant bear’s head. What better idea, she thought, than to have someone suit up as Stanford’s far crazier mascot? And who better to do it than yours truly? Wannabe redwood that I am, I fired off an email to the Tree. I sought 15 minutes of glory—one quarter of one basketball game. I wanted to experience the court through the veil of foliage that makes children dance and Cardinal fans whoop. I got a rejection letter from then-Band manager Tom Hennessy, ’05, who explained that the Tree, Isaac Salier-Hellendag, ’05, didn’t feel he could share his costume with anyone because the application process was “sacred, so to speak.”

That’s an interesting word for it. Tree hopefuls have allegedly affixed leeches to their backs and bitten the head off a snake, all in the name of being crowned a plant.

Still, I wanted to be that plant. I tried again in 2005, but was Treejected by Erin Lashnits, ’05, MS ’06. She said she would “love to see an article devoted solely to how awesome I am,” but that she simply couldn’t allow me to take her place because one needs “huge balls, towering alcohol tolerance [and a] particular quality of insanity . . . to become . . . the campus rock star.” Lashnits would later get the Axe when her game-time blood-alcohol level was found to be, er, above the tree line.

Seeking to restore the evergreen’s image, 2006 Tree Tommy Leep, ’06, MA ’07, approached the magazine seeking coverage, but ultimately he, too, was unwilling to shed his canopy. In 2007 I was out of the forestry biz because I’d had a baby. And then the unthinkable happened: 2008 Tree John Whipple, ’10, invited ESPN columnist Pat Forde to don his costume and prance around at a home basketball game. That man got to jump, shimmy and shake while unknowing Cardinal fans cheered him on. I smelled sacrilege: Pat Forde went to the University of Missouri!

Offended but not deterred, I set my sights on 2009 Tree Patrick “Patchez” Fortune, ’09. Although I cited the Forde precedent, Fortune denied my request to impersonate him, saying that Forde had been granted this honor by a different Tree and that, anyway, Forde is a “god among men.” Fortune proposed a counteroffer: he’d help me build my own Tree costume. After much soul-searching about my skills with a hot-glue gun, I agreed, whereupon Fortune stopped returning my calls.

That’s when I decided it was time to cut this whole thing down to size. Sure, I get it: only a few dozen people in the history of Stanford have ever been the Tree, and they’ve gone to ridiculous lengths for the privilege. But that’s exactly why they should let me have my moment in the limelight: so I can give my fellow leafless alumni the vicarious experience of being Stanford’s ultimate emblem.

So I’m not giving up. Like El Palo Alto itself, I will endure, even if I’m old enough that the mere thought of dancing with a 25-pound costume on gives me varicose veins. To next year’s Tree, Jonathan Strange, ’11, I have this to say: You want a god among women? You want—ahem—someone with requisite balls? You’ve got it. Forget the human-bowling stunt you pulled as part of your tryout. I’ve done some stuff at this university.

In the nine years I’ve worked at Stanford, I have relocated Porta Pottis blocking the entrance to the Mausoleum with my bare hands and pulled streakers off the stage at Full Moon on the Quad. I’ve busted seniors having sex in the bushes after their farewell dinner on the Quad. I’ve jumped out of a plane for a story on an alumni business. I’ve dodged tortilla Frisbees and nearly inhaled a swarm of ladybugs while reporting at Wacky Walk. I’ve been hit in the face by a former boxer. And I’ve eaten brain.

If my track record doesn’t show extreme love for this university, not to mention the appropriate quantity of insanity, then I don’t know whose does. Will I be a good tree? Hardly. But I have the cojones to get out there and shake my birthing-hips booty, thank you.

I’m not asking anymore—I’m challenging the new mascot to see the forest for the trees and let me take the court for a measly 15 minutes. It’s not like I’m going to beat the sap out of you. I’m just a silly writer who wants to dance till she’s gasping for breath, and then push through the next 14 minutes. What are you so afraid of, Tree?

Associate editor SUMMER MOORE BATTE, ’99, is a little terrified this might actually work.