As She Likes It

Victoria Pettibone saw too few female role models in film and theater, so she ) set about creating some. 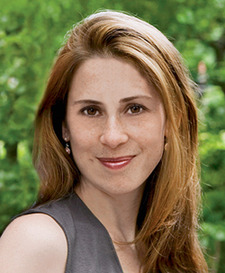 Theater producer Victoria Pettibone's favorite word seems to be "extraordinary." Pettibone, '97, is the co-founder of WET Produtions. It's how she describes the playwrights with whom WET works, the actors in its shows, its educational outreach program and her co-founder. Modesty may prevent Pettibone from calling something else extraordinary: the creation of a nonprofit dedicated to nurturing female playwrights.

A study from earlier in the decade indicates that only 17 percent of theater productions each year in the United States are written by women. Only 20 percent of film studio executives are female. WET's website notes, "If we continue to accept the under-representation and misrepresentation of women in the media, an industry that defines and reflects our culture, then we are responsible for supporting and perpetuating inequality."

WET (the name initially was Women's Expressive Theater) incubates plays and screenplays in workshops and readings and sometimes produces a full premiere. In the past its credits have included a reading of the screenplay that became Adrienne Shelly's movie, Waitress, and support for such writers as Brooke Berman, Julia Cho, Melissa James Gibson and Julia Jordan. This year, the company launched WET Films, a bicoastal film program to provide dramaturgical and development support to female writers.

WET raises money with an annual spring performance. The benefit presents "the work of six to seven extraordinary female writers, short plays on the subject of love," Pettibone explains with her customary exuberance. "We get a celebrity cast, and it's fabulous, and we have a huge party afterwards."

At Love '10 in April, more than 300 guests packed the Angel Orensanz Foundation, a former synagogue turned gallery on the trendy Lower East Side. Partygoers sipped champagne as they watched producer and author Lynda Obst (Sleepless in Seattle) receive the We Empower Together Award. In presenting the award, director and writer Nora Ephron joked, "This is a very cool place. I feel like if I'd ever been here before, I might have been more religious."

Five playlets featured such actors as Jennifer Westfeldt (Kissing Jessica Stein), Emmanuelle Chriqui (Entourage) and Ron Livingston (Sex and the City). After the show, Westfeldt said she supports WET "because they seem so committed to helping girls and women find their voice and self-esteem. They give them the encouragement they need to take risks."

WET does this primarily through its Risk Takers educational program, in which New York City high school girls attend screenings of movies about matters relevant to their lives. The girls then meet with actresses from the films; performers Lili Taylor, Audra McDonald and Frances McDormand have been among the participants. For her work with Risk Takers, Pettibone received an Avon Hello Tomorrow Award, which honors women who empower other women, and the Harlequin More Than Words Award, which recognizes women making a difference in their communities.

At Stanford, Pettibone took every class offered by former professor Anna Deavere Smith, who later hired Pettibone as her assistant in New York City. "She has a lot of spunk—a lot of class—a lot of everything good for the theater," Smith says. "We need more producers like Victoria in the theater—people who are willing to roam outside of their own box of what they know."

In New York, Pettibone ran into a high school friend, Sasha Eden, who was working at Bernard Telsey Casting. Pettibone got an internship at the firm and rose to the job of casting director. She and Eden often talked about stereotypes of women in the media.

"Sitting behind the table often with a group of men—male producer, male director, not always, but often—and talking about what's sexy and what's not sexy, I saw how I was perpetuating these stereotypes in what we were casting," Pettibone says in an interview at the DR2 Theater, where WET is in residence. (The theater is owned by Broadway producer and mentor Daryl Roth.) Pettibone and Eden also wondered where all the female writers were.

In 1999, Pettibone and Eden founded WET, working on it part-time at first. Now the company has offices in midtown Manhattan and an annual budget of $300,000.

While Pettibone acknowledges the long hours and huge responsibility of running a production company, she remains enthusiastic about WET. She remembers one previously directionless Risk Taker girl in particular. "All her friends were talking about prom and how they wanted to get pregnant at prom, and she said, 'You know what? I want to go to college,' because she had been so inspired by everyone she met in the program." The memory gives Pettibone extraordinary satisfaction.

Imprisoned by the shah, exiled by revolutionary excesses, Abbas Milani has spent 25 years pushing for democratic change in his home country. What makes him think it can happen now?