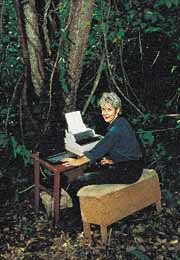 In a cave at Monte Alegre overlooking the Amazon River, archaeologist Anna Roosevelt was searching the sandy floor for evidence of prehistoric settlement. From the corner of her eye, she saw something black, glistening. It was a stone shaving from an arrowhead. Digging deeper, Roosevelt uncovered an area littered with sharp-edged stone flakes.

The cave dirt , it turned out, also contained the remains of buried fruits from nearby rain-forest trees; mussel shells and fish bones from the river below; and ancient drops of red pigment, the kind used on the paintings decorating the cave walls. After chemical analysis and three methods of dating, Roosevelt's team concluded that Paleoindians lived in the cave as early as 11,100 years ago. It was a startling finding, since most anthropologists believed people crossed a land bridge from Asia to Alaska 11,000 years ago and did not arrive in South America until thousands of years later. Roosevelt published her results in Science in 1996, igniting a controversy that challenged the foundations of anthropology in the Americas.

A number of established archaeologists have criticized Roosevelt's work, saying she erred in dating the artifacts. Richard Reanier, of the University of Alaska, concluded that the Amazon site had been settled 1,000 years later than the celebrated Clovis site in New Mexico. This conclusion preserved established theories by allowing for a thousand-year period of migration southward. John Douglas, a University of Montana colleague who co-authored the Science paper, notes that "Anna tends to cut a controversial figure in the field. She's often right, but she has a way of stirring people up."

Roosevelt, a great-granddaughter of Theodore Roosevelt, first became interested in prehistory at age 9, when she read a book about the dinosaurs of the Gobi Desert. That thrill of discovery carried her through a history degree at Stanford and a master's and doctoral degree at Columbia University. She later worked as a museum curator and did research in Venezuela. In 1981, Brazilian scientists asked her to join them in the Amazon, and seven years later she discovered the painted shelter at Monte Alegre.

A professor of anthropology at the University of Illinois-Chicago and a curator at the city's Field Museum of Natural History, Roosevelt relaxes from her studies by swimming and hiking.

Though the debate still rages over her finds in Amazonia, she has moved on to field work in Africa, which Roosevelt says "may revolutionize notions of the role of the tropical rain forest in human evolution." That research may bring more controversy -- but she is undaunted. "You have to face the idea that some opinions won't change," she says. "But in the end, if you have the evidence, you will be in the textbook, not them."