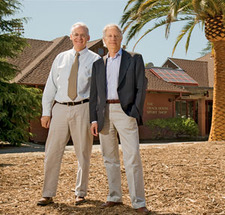 When the tour buses and family vans are streaming into the Oval at top volume, Stanford gets an estimated 1,000 visitors per day. The aesthetic payoff, as the newcomers' eyes rivet on the beckoning steps of the Main Quad, is unbeatable.

But for the most inquisitive of the drop-ins, including prospective students and their parents, there can be some confusion about what to do as soon as they've stopped snapping their initial photos.

Hence a major initiative by Richard Shaw, dean of admission and financial aid, and John Friesman, director of visitor relations and information services. They are overseeing the creation of a new visitor center, scheduled for completion by the end of the summer, that could make the intersection of Galvez Street and Campus Drive one of the major hubs on campus. The project received key financial support and direction from prominent Stanford benefactor John Arrillaga, '60.

The visitor center, featuring some leading-edge technology and a presentation room for 100 guests at a time, is taking over the red brick Track House, which will be remodeled. The Track House's Sport Shop, an apparel and gift store that's part of the Stanford Bookstore operations, moved into new glass-front space with a new name (Stanford Athletics Shop) underneath a section of the Cobb Track and Angell Field bleachers, which were expanded as part of the project. For more than a year, Friesman has been busy soliciting ideas from the Stanford community about what to anticipate in terms of public reaction and requests once the center opens.

Research indicates that campus visits are always among the most important factors in enrollment decisions, according to Janey Wheeler, president of the Collegiate Information & Visitor Services Association (www.civsa.org).

The experience is so telling, says Wheeler, the assistant director of visitor services at Oklahoma City University, that it can prove more formative than any other attributes of a school, however elite. "Regardless of the allure," notes Wheeler, "sometimes people are limited in what they can do" to afford or attend a particular university. But if the visit has won the student's heart and mind, "they'll find a way."

Among the advancements at Stanford's center will be interactive kiosks that provide a comprehensive guide to the University's programs and facilities. Friesman is consulting on their development with Terriblyclever Design, the tech firm that created the iStanford applications (and was co-founded by a Stanford undergraduate).

A presentation geared toward prospective students is called Discover Stanford and consists of a walking tour led by a student and a briefing from the undergraduate admission office. At present the only regularly available room contains just 43 seats, so the new 100-seat space will make it easier to accommodate crowds during periods such as spring break.

Among the issues Friesman continues to work on: the best way to coordinate activity at the visitor center—which will have a staging area for groups and buses—with the steady appearance of throngs of wide-eyed and unannounced visitors at the Oval, a continuing phenomenon based on Stanford's mystique with the general public.