A Man-Made Diamond Is Forever, Too: Nitty-gritty

Q: I'd like to know the differences in environmental impact between mined diamonds and those that are lab-created. Besides the obvious social upsides (avoiding war-torn producer countries, child labor in mines, etc.), what are the environmental benefits?

Unfortunately, detailed environmental data are not available for most diamond mines. However, BHP Billiton's Ekati mine in Canada has published its data, and it has received the Gold Champion Level from the Canadian Greenhouse Gas Challenge Registry. Here are BHP Billiton's data for fiscal year 2008.

While 143 pounds per carat is a lot less than the emissions of two people flying roundtrip from New York to Cancun for their honeymoon (1,944 pounds), the mine's emissions total does not reflect the ecosystem damage, habitat loss, or other negative environmental impacts that can result from mining operations.

Here's a look at lab-created diamonds made in Gemesis's Sarasota, Florida headquarters:

While Gemesis currently only produces colored diamonds, 26 pounds per carat is still less than one-fifth of the carbon dioxide emissions resulting from mining diamonds at Ekati! Now suppose that every diamond produced in Ekati in FY2008 were instead replaced by a lab-grown Gemesis diamond.

Replacing this one mine's annual diamond production with synthetic diamonds created in a lab could save the equivalent of about 483 million miles' worth of auto emissions!

Natural diamonds are created in an environment of high pressure and temperature deep in the earth's crust in places inaccessible to miners. However, some diamonds are pushed up closer to the surface by volcano-feeding lava corridors called kimberlite pipes. 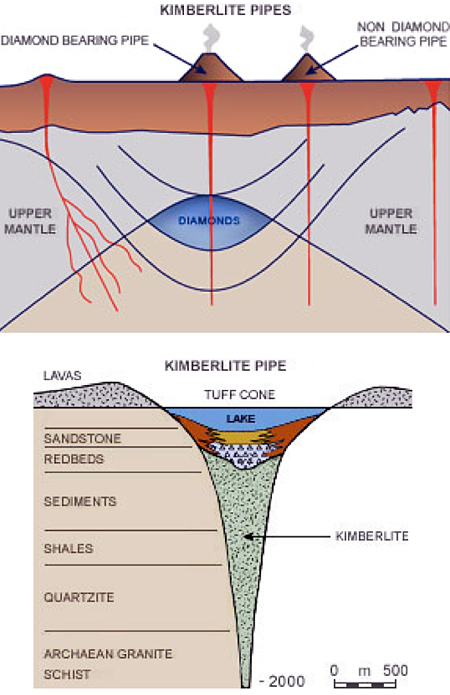 Diamonds are also sometimes found in river and lakebeds. Depending on the source rock and location, natural diamond mining is done via open pit mining of kimberlite pipes, through underwater mining of the seabed, or by the small-scale digging and searching of artisanal miners.

According to official statistics released by countries that participate in the Kimberley Process for diamond certification (see below), the leading producers of uncut "rough" diamonds by weight in 2008 were Russia, the Democratic Republic of Congo, and Botswana. While the U.S. Geological Survey does not track gem-quality diamond reserves, the Democratic Republic of Congo, Botswana, and Australia are estimated to have the world's greatest industrial diamond reserves.

The diamond trade has been a factor in recent civil wars in Angola, the Democratic Republic of Congo, Côte d'Ivoire, Liberia, and Sierra Leone. In 2000, the United Nations produced a resolution calling for a "rough" (uncut) diamond certification organization in order to stop the flow of conflict diamonds, which were being smuggled and sold to fund these civil wars and rebellions. As a result, the Kimberley Process has been used since 2003 to certify rough diamonds as conflict-free and to prevent member countries from trading diamonds with non-members. Currently, the Kimberley process has 48 active members. In a 2006 report evaluating the Kimberley Process, international NGO Global Witness found that the process had greatly increased legitimate diamond exports but warned that there were still gaps in the system.

The technology for making small industrial diamonds in the lab has existed for more than a half century. However, companies are now using two different types of techniques to make larger gem-quality diamonds.

Apollo Diamond uses a process called chemical vapor deposition to grow diamonds in its lab. According to Apollo, the process starts with a diamond seed that's about the size of a shirt button. Then, Apollo "rains carbon onto the diamond seeds, growing new diamond, one crystal at a time." Following an alternative process, Florida-based Gemesis uses machines that create the same high-pressure and high-temperature conditions that yield diamonds in nature.

Cultural tradition and societal expectations have made diamond engagement rings the betrothal gift of choice in the United States. Yet, lab-created diamonds have not yet reached the level of social acceptability of natural diamonds. Regarding Tiffany & Co.'s decision not to carry synthetic diamonds, vice president of investor relations Mark Aaron told the Wall Street Journal in 2007: "Natural diamonds fit in our stores—diamonds that come out of the ground." Nevertheless, synthetic diamond producers want to improve the positioning of their products by referring to them as "cultured diamonds" instead of as "synthetic diamonds," and the Federal Trade Commission recently declined to declare the "cultured" label misleading.

De Beers has developed a machine that can detect whether a diamond is lab-created. However, most people can't tell the difference, so a lab-created diamond could always be the buyer's little socially unacceptable secret.

A Quick Word about Metal

Most gem-quality diamonds are set into metallic jewelry of one kind or another (rings, earrings, necklaces, etc.). Precious metal mining can have severe, negative environmental impacts. However, there are now a number of retailers, such as Brilliant Earth, that offer settings made from recycled metal. It's not just about the diamond; where you put it matters, too!

Andy Martin, ’02, plans to receive his MBA and master's in earth sciences in 2010, and develops residential energy management tools for a start-up in New York City.

A Man-Made Diamond Is Forever, Too: Essential Answer

A Man-Made Diamond Is Forever, Too: Essential Answer