A Gymnast in Full 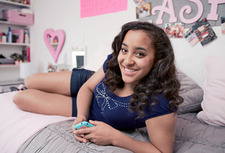 There's going to be a lot of attention devoted to Ashley Morgan the daughter, sister and teammate. But don't think for a second that she's not her own person, or that the people around her don't know that.

Morgan, who has leaped into the limelight as a freshman on the gymnastics team, is intensely close to her parents. Either by phone or text message, she's in steady contact with her mother, Theresa, every day. And when she sums up her father, Joe, the baseball Hall of Famer and ESPN announcer, she says he has been a profound influence without ever being pushy. "He's always been my rock."

The more she describes her parents, the more she seems the inevitable extension of their guidance and support. Until you talk to Theresa and Joe, that is. What they see is a woman who has thought and spoken for herself ever since she was a precociously astute preschooler.

Theresa remembers, for instance, how a teacher noted that Ashley had "second-stage thinking." And that meant? When told she was going to get a cookie, Ashley asked, "Is there going to be another one?"

That may have been an early sign of a composure and self-control that her father believes is central to her athletic success. His best anecdote about her emergence as a formidable young gymnast involves a meet in which she started poorly and then rallied superbly. "A lot of people," he says, "don't know how to get up off the deck and then go at it harder. That told me a lot about her."

Stanford coach Kristen Smyth has observed the same tenacity under pressure since Morgan arrived on the Farm from her Danville, Calif., hometown. Challenges at the collegiate level can be daunting, and Smyth was just hopeful, not certain, that Morgan would adapt quickly. Whoosh. In short order, Morgan earned an elite place as a competitor who can be called on for all four events—balance beam, floor exercise, vault and uneven bars.

"That's a very difficult thing to do," says Smyth. "For a freshman, it's huge." In the first of two regular-season meets when Morgan tackled the all-around, she won it with a performance that included victories in the vault and beam, earning her the honor of Pac-10 gymnast of the week.

Morgan also adapted rapidly to the byplay within the gymnastics program. She's thrilled with the team spirit even though she gets teased constantly over her fondness for things that are pink or have bows. "I'm very, very girlie," she says, assuming an explanation is necessary. But she's certainly not defensive, given her mischievousness in raiding the dorm room of a male gymnast to plaster it with pink masking tape.

The more individuality Morgan displays, the less she may end up subjected to questions about yet another family member: twin sister Kelly, who plays soccer for the University of Southern California. As it stands now, the Kelly factor is just one more reason why Ashley's exploits tend to share credit with everything under the general heading of Morgan family specialness. Still, if it bothers Ashley, she doesn't show it—she's too unflappable for that.

Another signature trait, notes her mother, is "a very strong intuitiveness" that even explains Ashley's presence at Stanford. "I just knew from the time I was little that I wanted to go here," she says. "And as soon as I got here, I just got the feeling that this is where I should be."

Her showing in several Pac-10 championship events in March reinforced that she's exactly where she belongs, with a clutch contribution on the balance beam helping Stanford finish second behind UCLA.

"Whatever Ashley has accomplished has been her own achievement," declares her father. "Not mine, not anyone else's."

All That Physics Allows

Exploring the ups and downs of dance.