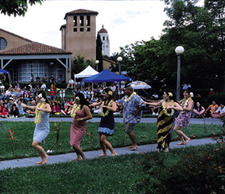 Hips swaying and hands portraying a timeless story, Ryan McCormack, ’03, led the procession of hula dancers to the center of Manzanita Courtyard. The only guy in the flower-adorned bevy, he opened Stanford’s 23rd annual luau with a mellifluous Hawaiian chant.

Sano, MA ’91, DMA ’94, studies the renaissance of Hawaiian musical tradition, teaching a sophomore seminar about slack-key guitar (ki ho'alu) and the culture that produced it. He says the hula revival of the 1960s—with men performing publicly —bore some similarities to the resurgence that King David Kalakaua led in the late 1880s, when he reintroduced the dance that had been quashed by the first U.S. missionaries to the islands in the 1820s. And Sano suggests that there’s a similar flowering of Hawaiian culture on campus today: “We’re experiencing a wonderful high point because of an exceptional critical mass of students from the islands.”

Between 20 and 30 freshmen arrive from Hawaii each fall, according to Amanda Rang, who just finished a term as chair of the Stanford Hawai'i Club. Many are from the Kamehameha Schools, which enroll only native Hawaiians; several others are graduates of Punahou, the first American secondary school founded west of the Mississippi, in 1840.

Rang, ’03, who grew up on Oahu, has been dancing hula for 12 years and studied Hawaiian language in high school. At Stanford, she has been what Sano calls “an amazing force.” She teamed up with Julia Nelson, ’04, to teach a student-initiated course about Hawaiian sovereignty in 2001, and has tracked down Bay Area instructors to teach a first-year Hawaiian language course. As a junior, Rang led an alternative spring break trip that looked at contemporary native Hawaiian issues. “We spent a night at Waikiki, and it was wonderful because everyone was so disgusted,” she says. “That was my goal—to show how tourism has impacted ecosystems and to do some beach cleanups.”

During this year’s spring break, Sano, who is recording his third CD of slack-key guitar music, took Stanford Taiko to a drum-building workshop on Maui. Next spring, he will tour the islands with the Stanford Chamber Chorale, performing at Honolulu’s Bishop Museum and Kawaiaha'o Church, where Queen Lili'uokalani, the last reigning monarch and a prolific composer, was choir master and organist. “It should be a rich experience for students,” Sano says. “But to sing the queen’s music with the portraits of the royalty looking down on you is kind of spooky, too.”

Perhaps a subject for the hula at next year’s luau.

Words from the Heart