A Closer Look at Ebola

Ebola virus disease, responsible for an international health alarm from late 2013 to mid-2016, has an average fatality rate around 50 percent, according to the World Health Organization. Its extremely infectious nature—human-to-human transmission—has contributed to outbreaks that had a rate of 90 percent.

But physician and anthropologist Eugene Richardson, a former School of Medicine fellow in the Division of Infectious Diseases and Geographic Medicine, believes the rate could be knocked down to 5 percent with improved treatment strategies in outbreak zones and, most important, the ability to get patients to good-quality intensive care units.

As a Stanford doctoral candidate, Richardson led a four-month controlled study in Sierra Leone, a core country in the epidemic’s alarm zone of West Africa, during the end of 2015 and start of 2016. His team tested 187 individuals for evidence of Ebola infection. None of them was known to have suffered from the disease, but they had previously been quarantined because of close exposure to victims. The results identified 14 people with antibodies, indicating they had been infected at some point. In addition to suggesting Ebola can be minimally symptomatic—two of the 14 recalled having fevers, the others nothing—the data is evidence that Ebola transmission may have been much wider than calculated during the epidemic that caused thousands of deaths in Liberia, Guinea and Sierra Leone.

Richardson, now an associate physician in the Division of Infectious Diseases at Brigham and Women’s Hospital in Boston, is exhaustively conscientious about noting how many challenges are involved with drawing conclusions from one small study in one hot-spot village. Considerations range from the scientific, such as possible imperfections in the antibody testing, to guesswork about social reactions, such as how many people hid from medical surveillance during the epidemic and were never tallied as exposed or not. 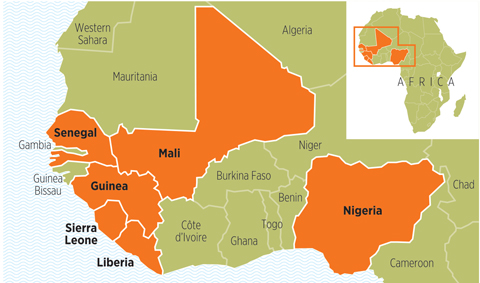 Still, the team’s work—which got key funding from Stanford’s Center for Innovation in Global Health, spurred by senior associate dean Michele Barry—spotlighted a number of important issues. To start with, much more atten-tion was then directed to the incidence of minimally symptomatic Ebola, which Richardson estimates could be 25 percent of infections. “It changes the public picture,” says Richardson. “There is a spectrum of disease; not everybody dies from it.”

Part of what follows, notes Richardson, is an awareness of the limits faced by so-called “medical caravans” that bring emergency response teams of volunteers to crisis zones for varying amounts of time. The help they bring is qualified by their focus on intervening with people already sick or identified as imminently at risk, to the neglect of any ongoing efforts to strengthen the underlying health system.

One major upshot, says Richardson, is that there are many undocumented Ebola survivors who might be deemed eligible for medical or financial aid in West Africa now and in the aftermath of any future outbreaks.

This spring, Richardson was headed to Liberia for further research, based on information about a site that so far has gone uninvestigated in terms of the extent of the population that survived after being ill with Ebola, in addition to those who may have been infected but didn’t have or recognize any symptoms.

Frost Gets a Tune-up

What students write home about, then and now.